The state-mandated hourly compensation of construction workers on New York public works projects generally rose by double the 17 percent inflation rate over the past decade—but most of those added dollars did not boost workers’ pay, according to “prevailing wage” schedules for major building trades.1 Instead, between 2007-08 and 2017-18, more than half of the compensation increase was driven by supplemental benefits, including pension fund contributions and health care coverage.

This trend highlights a key shortcoming of New York’s prevailing wage law, which requires all contractors on state and local government projects to match the hourly compensation levels dictated by union collective bargaining agreements. By including fringe benefits in its definition of “wage,” the law effectively provides a taxpayer bailout of underfunded union pension and retiree health care plans. The law drives up building construction costs by at least 13 percent to 25 percent, an Empire Center study found.2

For example, the charts below compare 2007-08 and 2017-18 prevailing wages for laborers, the building trades’ largest and lowest-paid class of workers. As shown, benefit costs ate up more than half of the increase in all but one region of the state (Long Island). Nationally, by contrast, fully three-quarters of the average increase in hourly construction compensation went to worker wages. 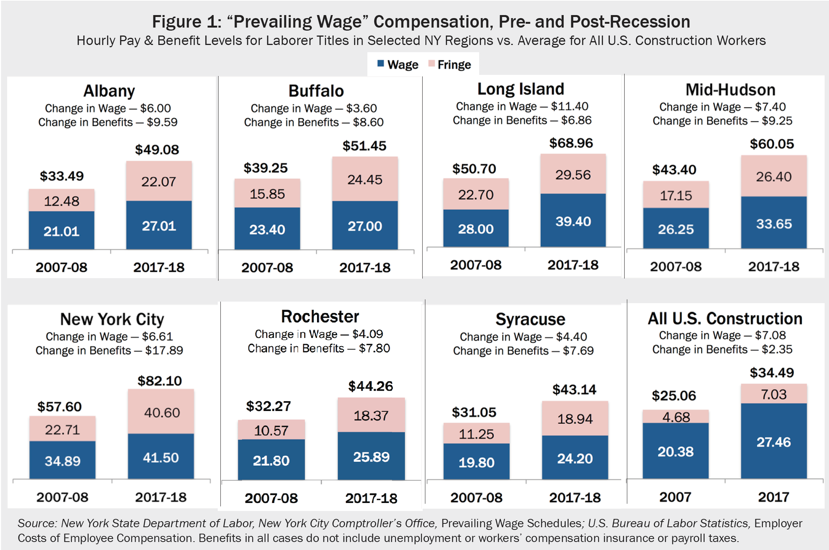 The pattern for laborer class employees is replicated across other major titles, based on a review of prevailing wage schedules in major New York metro areas for 13 leading building trades occupations.3 For the total of 228 titles in seven metro areas covered by our review:

The labor share of non-residential construction costs varies significantly by location and type of project, and thus it is difficult to estimate the total financial impact of prevailing wage and benefit changes on state and local budgets. However, given the tens of billions of dollars allocated to such projects over the past 10 years, it’s safe to say the additional mandated payments for fringe benefits alone have translated into hundreds of millions of dollars in added taxpayer costs.

The data show that a significant portion of New York’s increased public works spending since 2007 has flowed into union benefit plans, most of which lack sufficient funding to back up their long-term promises. Rising benefit costs have consumed taxpayer dollars that might otherwise have been spent on bigger pay hikes for construction workers—and on additional public buildings, roads, bridges, transit facilities and other infrastructure projects.

3. A spreadsheet can be downloaded at https://www.empirecenter.org/prevailingwage2018data/