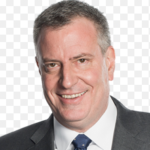 New York City Mayor Bill de Blasio made a splash this morning by announcing a plan “to guarantee health care” for every city resident.

Although his office called it “the largest, most comprehensive plan in the nation,” the proposal appears – based on limited details provided so far – to be a relatively modest expansion of existing safety-net programs. The total price tag for the plan, when fully implemented, was said to be $100 million a year, a fraction of what the city and state already spend on health care for the poor and uninsured.

According to the press release from the mayor’s office:

The plan will serve the 600,000 New Yorkers without insurance by strengthening NYC’s public health insurance option, MetroPlus, and guaranteeing anyone ineligible for insurance – including undocumented New Yorkers – has direct access to NYC Health + Hospitals’ physicians, pharmacies and mental health and substance abuse services through a new program called NYC Care. All services will be affordable on a sliding scale. The programs will include customer-friendly call lines to help New Yorkers – regardless of their insurance – make appointments with general practitioners, cardiologists, pediatricians, gynecologists and a full spectrum of health care services.

One part of the proposal calls for the city to “double down on efforts to boost enrollment in MetroPlus,” an existing insurance plan operated by New York City Health + Hospitals. Premiums offered through the state’s Affordable Care Act exchange range from $450 a month for bronze coverage to $850 a month for platinum coverage – but tax credits reduce the net cost for lower-income enrollees.

For those who are uninsured and ineligible for subsidies – perhaps because they are non-citizens – a second program to be called NYC Care will connect them with care through Health + Hospitals facilities. Services “will be priced on a sliding scale to assure affordability.”

This sounds very much like an existing program called NYC Health + Hospitals Options, described on its website as “a free or discount payment plan to make our health care services affordable for you and your family.” How NYC Care would improve on Options was not initially explained.

Also unclear is how the new service offerings would affect the overall finances of the Health + Hospitals. The agency depends on more than $2 billion a year in subsidies from the city budget, in large part because so many of its patients lack coverage – and de Blasio’s initiative would seem likely to increase the number of uninsured patients who use the system.

If, however, the initiative succeeds in connecting more people with routine care, and diverting them from emergency rooms for basic needs, that would both improve public health and save money – which is well worth doing.

The plan also illustrates a timely point: New York (and especially New York City) is closer to achieving universal access to decent health care than is commonly realized – close enough that the mayor can apparently make it happen for a mere $100 million.