Disentangled from the politically turbocharged, high-volume rhetoric of his State of the State message, the first Executive Budget of Governor Andrew Cuomo’s third term is largely a stay-the-course affair—for better and worse.

Adjusting for various planned and proposed accounting changes, the apples-to-apples spending increase appears at first glance to be more like 3 percent (see explanation below). However, even with adjustments, it is more restrained than some members of the new Democratic legislative majorities would prefer.

The budget includes a striking new fiscal yellow flag: a sharp decline in personal income tax receipts, now expected to fall $500 million below mid-year projections. The budget narrative says the drop-off  “appeared abruptly” at the end of December and has continued through early January, “a period that is typically marked by a relatively heavy flow of PIT receipts compared to the rest of the fiscal year.”

So what’s going on?  The governor’s financial plan narrative cited “increasing [financial market] volatility in the second half of 2018 [during which major stock indexes dropped 10 percent], driven in part by rising interest rates, trade tensions, and instability in government institutions at home and abroad.” It also pointed to “behavioral changes by individual taxpayers and firms” in response to the new federal tax law and its cap on state and local tax (SALT) deductions.

In response to this trend, projected state tax receipts for 2020 have been reduced by $1.6 billion for 2020—and by increasing amounts in the out-years—compared to previous projections.

The shakiness in PIT receipts comes at a time when New York has become more reliant than ever on its income tax, which makes up two-thirds of the state’s total tax revenues. The PIT, in turn, is disproportionately reliant on the highest-earning 1 percent of taxpayers, many of whom are also facing higher combined federal, state and local income tax bills thanks to the SALT cap. In fact, “behavioral” change in taxpaying behavior tends to be concentrated among these high-earners, who have the greatest flexibility in controlling the timing and nature of their income.

An acceleration of the recent decline in the  “resident” share of New York’s high-income taxpayers, or other behavioral changes among these residents shrinking their exposure to New York’s PIT, will have outsized negative effects on the state’s overall financial stability. And that makes the centerpiece of the governor’s revenue agenda even more questionable.

Doubling down on “millionaires”

Cuomo previously had signaled he would propose an extension of the nine-year-old “temporary” personal income tax (PIT) surcharge on filers with incomes starting at $1 million or more, which boosts the top rate to 8.82 recent from 6.85 percent, which has been the permanent-law top rate since 1997.

The added tax raises about $4.5 billion a year and is scheduled to expire Dec. 31. But after previous extenders of three, three and two years, respectively, the governor is now seeking to push the so-called millionaire tax out for another five years, through 2024, which could be a big step towards permanent enactment of the higher rate.

Cuomo provided no fiscal justification for extending the high-earner tax over a longer period. The FY 2020 financial plan indicates that adoption of the Executive Budget, including the millionaire tax extender, would still leave the state facing a $747 million budget shortfall in fiscal 2021, followed by surpluses of $904 million in fiscal 2022, growing to $2.5 billion in fiscal 2023.

In other words, even with the decline in receipts, Cuomo’s own budget estimates show he doesn’t need all the money the tax hike would raise after an extender of only two years.  According to the Executive Budget, income millionaires make up just 1.1 percent of all taxpayers and account for about 25 percent of the total adjusted gross income in New York’s tax base, but will generate roughly 37 percent of the personal income tax in 2019.

The state’s heavy dependence on wealthy taxpayers, whose taxable income is notoriously volatile, is a big financial risk factor. That risk has grown under the new federal tax law, which has virtually eliminated state and local tax (SALT) deductions for a class of taxpayers whose SALT deductions averaged more than $500,000. For the highest-earning residents of New York City, the new tax law will drive a net increase in combined income taxes—including the highest effective (post-deductibility) combined state and city top rate in history.

The other sizable proposed revenue-raisers in the proposed budget are:

The budget also assumes—as it must, absent some proposed change—the continued phase-in of an eight-year reduction in middle- and upper middle-income personal income tax rates, which was enacted in 2016 and is due to become fully effective in 2025.

From most taxpayers’ perspectives, the best news in the budget package concerns the fate of the state’s historic 2011 law capping the annual growth in local property taxes at the lesser of 2 percent or the consumer price index. The law is saving New Yorkers billions of dollars, slowly but surely reducing the overall net burden of property tax outside New York City.

Cuomo last fall promised he would seek to make the cap permanent, as it remains awkwardly linked to a rent regulation law due to expire in June.

Although he only paid lip-service to that goal the last time the law was up for renewal, in 2015, this year marks the first time the governor has bundled the property tax cap into budget bills (Part G of the Public Protection and General Government bill), which gives him more political and legislative leverage to accomplish that goal.

Significantly, he has not made any change to the existing cap language, resisting attempts by tax cap critics and opponents to raise the levy limit to a flat 2 percent (eliminating inflation), to eliminate supermajority requirements for overrides, or to open bigger loopholes for capital expenditures or other factors.

As a result, rather than waiting until later in the session, when changes to the rent law will be hammered out, both houses of the Legislature will need to stake out a position on the future of the cap in their one-house budget resolutions, which will be scheduled for voting in early March. The resolutions typically are combined with amended version of the governor’s Article VII budget bills, making it clear which provisions the two houses reject, accept or want to modify.

The new Senate Democrat majority leader, Andrea Stewart-Cousins, D-Yonkers, has endorsed a permanent cap, and her half-dozen Long Island members (five of them newly elected) have also pledged to back the governor’s position. Thus the Senate presumably can be expected to include a clean, permanent cap in its one-house budget.

In the Assembly, which in the past has been less friendly to the tax cap, Speaker Carl Heastie may prefer to open budget negotiations by rejecting Cuomo’s provision. In that case, however, Heastie will effectively be asking his members to cast what can fairly be portrayed as a symbolic vote against a permanent cap.

Since his third year in office, Cuomo has set a 2 percent limit on growth in disbursements via the State Operating Funds budget, which includes all non-capital expenditures supported by state taxes, fees or other non-federal revenues.

Strictly speaking, Cuomo hasn’t hit his 2 percent target on the nose, and the proposed 2020 budget is no exception.

As shown below**, accounting changes described or alluded to in the narrative of the Financial Plan indicate the actual change in spending is more like 3 percent. Even with these adjustments, however, Cuomo’s inflation-adjusted spending record reflects greater restraint over a longer term than any of his gubernatorial predecessors since Hugh L. Carey (1975-83).

** UPDATE: An alert reader notes that pre-payment of $500 million in income tax refunds should not be counted as affecting disbursements. However, it also appears that other financial plan shifts and reclassifications not listed in the original table below would roughly duplicated that amount.  The Citizens Budget Commission has separately reached a similar estimate that proposed State Operating Funds disbursements are actually up 3.1 percent after adjusting for accounting and timing changes. 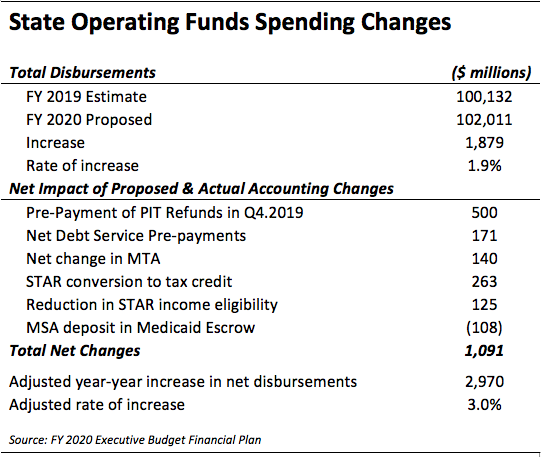 The Cuomo Administration Resists Sharing Records of its Vaccine Review