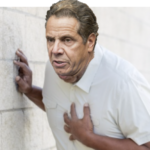 That “serious as a heart attack” $2.3 billion tax shortfall disclosed by Governor Andrew Cuomo in early February will net out to $900 million once final returns are filed in mid-April, according to the governor’s subsequent Financial Plan update.

In the context of a $100 billion state operating budget, a $900 million drop is more like an angina attack than a full-blown coronary event—but a worrisome symptom all the same.

Holding state operating funds spending growth to an official 1.8 percent—or more like 4 percent, according to Comptroller Thomas DiNapoli’s staff analysis—isn’t good enough. The financial plan numbers make it clear that the state needs to do much more to build reserves and restrain spending to prepare for an economic downturn. A recession grows more likely with every year—probably by mid-2020, according to at least one of the economists who presented at Thursday’s joint revenue forecasting conference in Albany.

Declining revenues highlight another troubling symptom in the updated financial plan: growth in the state’s structural deficit — i.e., the difference between recurring receipts and recurring disbursements.

Cuomo has warned that New York depends heavily on high earners, and that the new federal tax law and its $10,000 cap on state and local tax (SALT) deductions “encourages high-income New Yorkers to move to other states.” On those points, he’ll certainly find no disagreement in this corner.

Yet, as explained in the final section of this blog post, Cuomo’s income tax forecast for the next four years doesn’t seem to line up with his out-migration worries.  In fact, for a guy expressing worry that the SALT cap “could change the economic trajectory of this state,” Cuomo is surprisingly optimistic in his long-term revenue projections. Reaching a revenue consensus with the Assembly and Senate would require him to embrace even more optimism.***

*** UPDATE —  The governor and Legislature were unable to reach a revenue consensus, as announced Saturday in this statement by Budget Director Robert Mujica. DiNapoli must now release his own revenue estimate by March 5. However, notwithstanding the wording of Mujica’s statement, the comptroller’s number won’t be “binding” on the Legislature, although the governor might treat it as such.

This late in an exceptionally long national economic expansion (which dates back to 2009), the structural budget gap should be shrinking, especially after eight years in which the governor has purported to hold annual spending increases under a self-imposed 2 percent cap.

Instead, with the reduction in PIT revenues, Cuomo is projecting the biggest future gaps at this stage in the process since his first year in office.

New York State’s traditional method of forecasting future budget gaps (i.e., an excess of projected expenditures over projected receipts) compared the receipts forecast to the path of spending under current law—essentially a measure of where the two trend lines are heading, if left on autopilot. An alternative measure, established by Governor Cuomo as part of his FY 2014 Executive Budget, measures the gap based on the assumption that spending is held below the governor’s self-imposed annual growth cap of 2 percent.

Based on the financial plans as amended in February in each of the past eight years, the chart below depicts gaps projected by the governor for the immediate “out year”  — i.e., the fiscal year following the upcoming year. These projections always are based on the assumption that the Executive Budget would be enacted without changes, and that “current” law would determine tax and spending policies in the future.

As shown, the projected out-year gap was at its lowest in the Executive Budget update for fiscal 2017 (i.e., the update issued in February 2016). At that point, the current-law baseline measure (red bar) pointed to an out-year (FY 2018) gap of slightly more than $1 billion, while a gap calculation assuming 2 percent spending growth (the blue bar) forecast a surplus of $500 million. Just three years later, the outlook is much less rosy, pointing to much larger shortfalls than any previous projections under Cuomo. 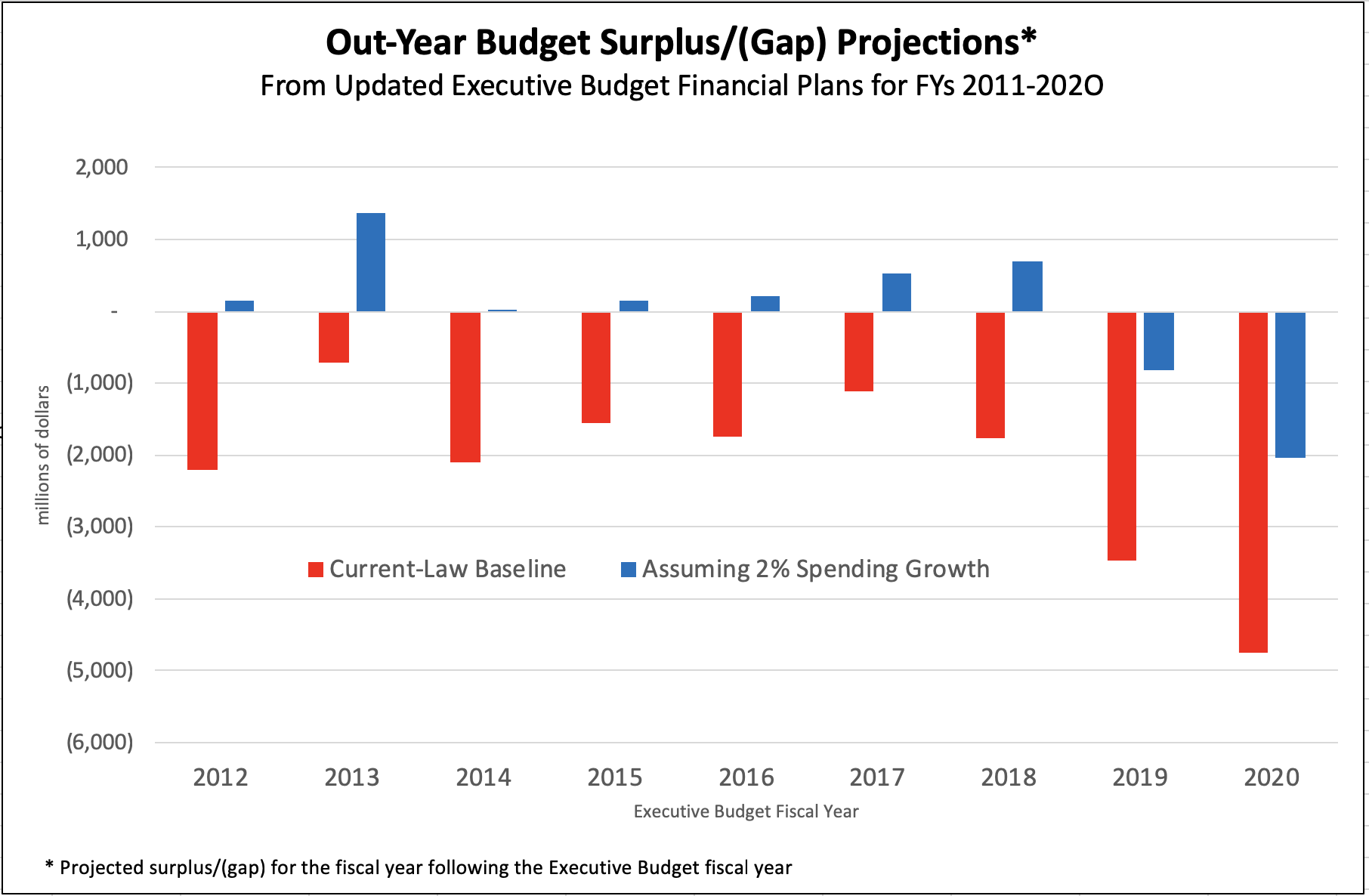 Even before he needed to fill bigger gaps created by the income tax receipts, Cuomo had engaged in fancy fiscal footwork to keep the apparent spending hike under 2 percent. Among other things, he has shifted more spending “off budget,” tapped various reserve funds, and dipped into reserves. He also reduced the net spending increase on Medicaid by $550 million, and saved a little more (about $20 million) by planning to close three prisons. The net result is a spending hike officially pegged at 1.8 percent—but closer to 4 percent after correcting for bookkeeping gimmicks, according to Comptroller DiNapoli’s staff analysis of the budget.

The next chart looks at projected gaps for all three out years of the original and updated FY 2020 Executive Budget financial plans—i.e., fiscal 2021 through 2023. As shown, the 30-day update has added significantly to the projected current-law shortfalls and has dramatically shifted the projection based on 2 percent spending growth, from a small gap followed by surpluses to two much larger gaps followed by a small surplus. 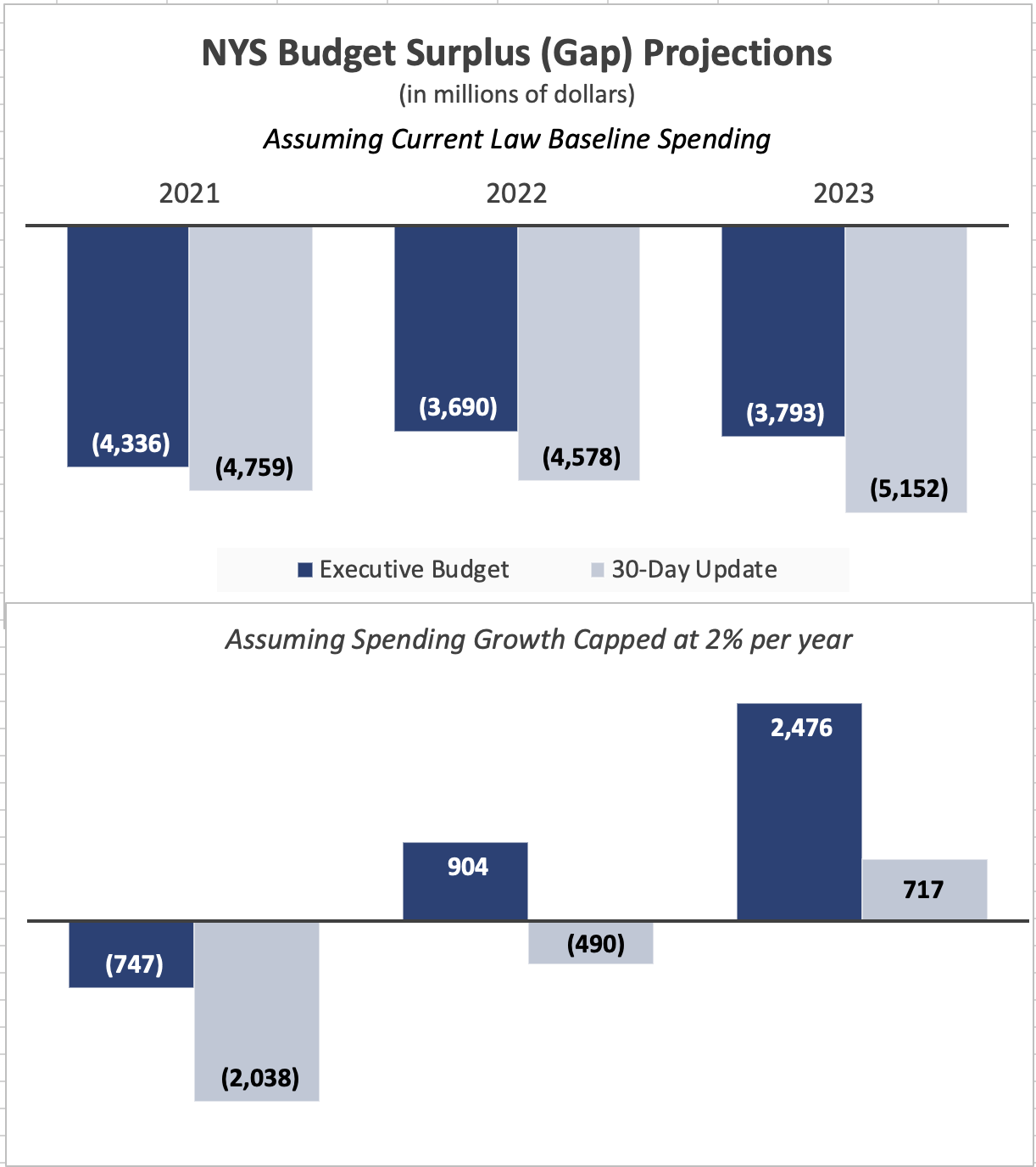 If these forecasts are correct, Cuomo can avoid a deficit (without raising taxes) in FY 2021—the year after next—only by holding FY 2021 spending to 0.2 percent, or practically nothing in nominal terms. And absent an increase in projected revenues, any net addition to Cuomo’s proposed spending in the upcoming FY 2020 will require nominal spending cuts in FY 2021. The Legislature needs to have a clear understanding of these trends as the budget process begins in earnest over the next few weeks. 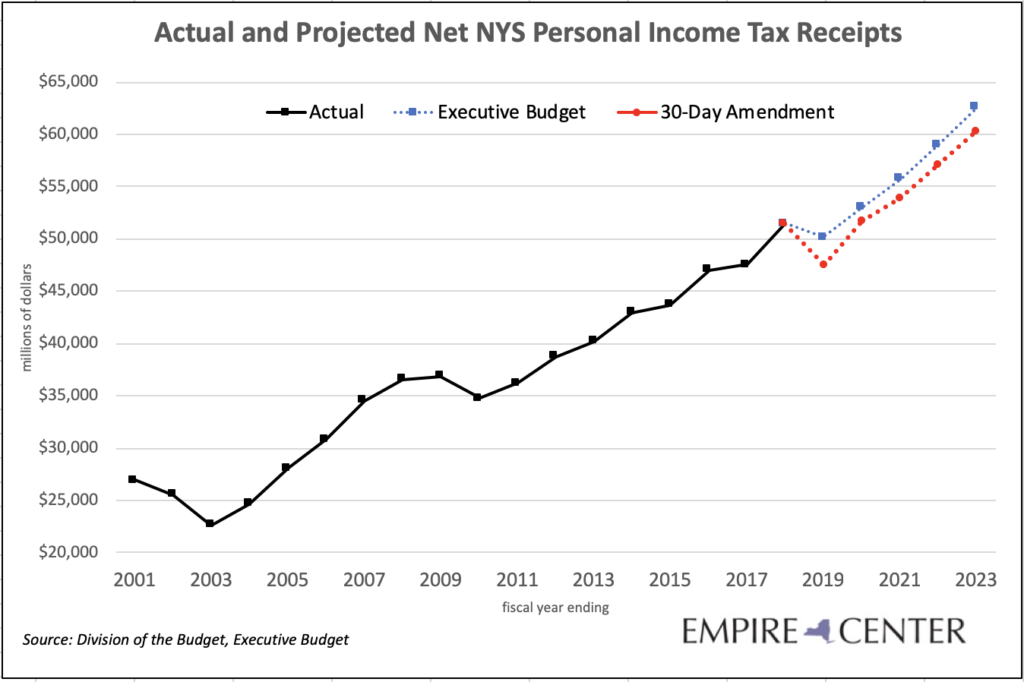 Note that big drop in the current year, which largely reflects changes in the timing of tax payments by high-earning taxpayers in response to the new federal tax law. Note, also, the strong projected rebound and resumed upward trend starting next year.  The governor assumes PIT receipts will grow at a nice healthy rate, despite three factors that will tend to erode them:

Cuomo and majority legislative conferences would normally be expected to announce a revenue consensus today. If they can’t reach consensus, Comptroller DiNapoli will be asked to supply one.*** [see UPDATE near beginning of this post]