Fewer than one in four New York City office workers are back in the office, according to a pair of datasets issued this week.

New York’s office re-occupancy rate is 30 percent lower than the current 10-city average of 31.3 percent. The Big Apple’s neighbors at the bottom of the index are San Jose (22.4 percent) and San Francisco (19 percent) — cities with tech-heavy workforces inclined toward remote work even prior to the pandemic. Houston (45.7 percent), Dallas (45.2 percent) and Austin (44.1 percent) — the trio of Texas cities sitting atop the index – all have at least double the office attendance rate of New York, as can be seen in Kastle’s chart below: 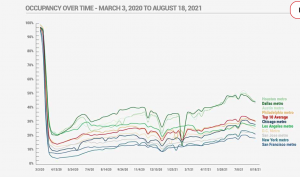 The relative rank of the cities in the index hasn’t changed much since offices emptied out nationwide in March 2020. No single factor explains the disparity in attendance rates. But in-office attendance is highest in the cities where commuters drive to work, and lowest in metros where workers are most reliant on mass transit—like New York.

New York was the only metro where a majority—55.6 percent—of city workers got to work via some form of public transportation in 2019, according to an April Census Bureau report. San Francisco ranked second at 38.6 percent.

An overwhelming majority of office workers in Houston and Dallas, in contrast, commute by car, with fewer than four percent in either city using mass transit.

It’s with understandable reluctance that many commuters accustomed for more than a year to working from home will resume the costly, time-consuming train trek into Manhattan from Long Island, Westchester and other environs.

Much will depend on what the boss demands. Manhattan employers recently responded to a survey conducted between August 9 and August 20 by the Partnership for New York City, which found that 23 percent of Manhattan office workers are back in the office (reinforcing the Kastle findings). Employers also projected 41 percent of employees would be back in the office by the end of September. That’s down from May, when employers projected 62 percent of employees would be back by then.

Fully 81 percent of New York City-based workers are vaccinated, according to responses from companies that disclosed vaccination estimates (companies were asked for vaccination rates for all employees, not just Manhattan office employees). Still, 44 percent of employers have delayed their return-to-office plans because of the recent rise in COVID-19 cases due to the Delta variant. And 49 percent will require all returning employees to wear masks while in the office, vaccinated or not. Finally, only 26 percent of employers are requiring employees to be in the office full time.

Given the incentives, it’s no surprise Manhattan’s office workers are slow to return downtown.