It’s official: the viral lockdown has been an economic catastrophe of historic proportions for New York State.

The extent of the damage was documented in the monthly employment report released yesterday (unusually, and inexplicably, after normal business hours) by the state Labor Department.

In April, the full first month affected by the coronavirus pandemic, the new data show:

As shown below, after a near-vertical fall, the April private-sector job count is now the lowest for the month in at least 24 years. 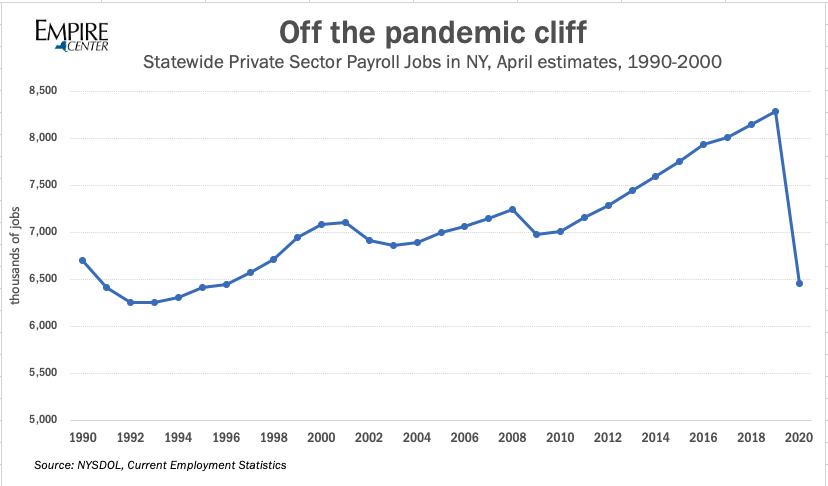 Job losses were greatest in the COVID-19 epicenter of New York City, and in the neighboring viral hot spots of Long Island and the Lower Hudson Valley. 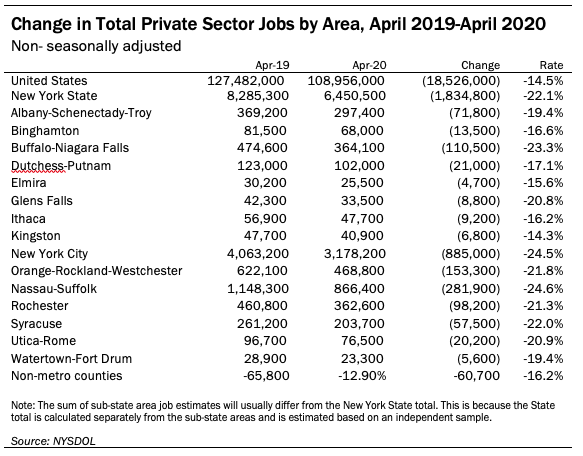 But while New York City’s private-sector employment has subsided to 2010 levels, the losses in the rest of the state are proportionately worse by historical standards. In every region of upstate except Ithaca and Albany-Schenectady-Troy,  private employment has dropped to its lowest level on record in the 30 years since the current statistical series began in 1990. The same is true for Nassau and Suffolk counties, and for Orange-Rockland-Westchester.

The distribution of losses by major sector was no surprise: 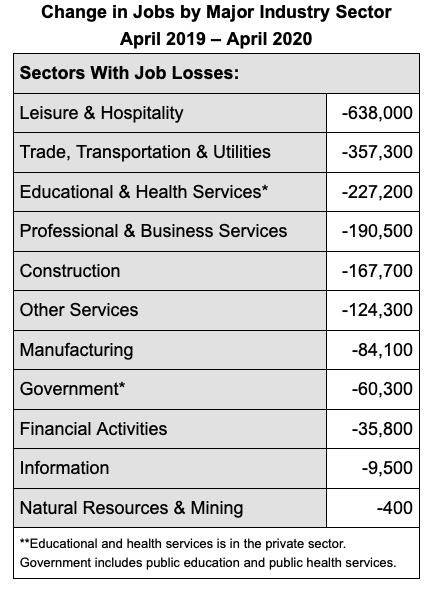 For leisure and hospitality, including restaurants and hotels, the downturn equates to a virtual apocalypse—a job loss of 68 percent. The less severe Trade, Transportation and Utilities sector employment decrease of 23 percent reflects in part the “essential” status granted to grocery stores, hardware outlets and some other retailers during the lockdown. Among the super-sectors, the third biggest percentage employment drop was in the state’s manufacturing sector, already struggling before the pandemic, where April employment was down 19 percent—despite the “essential” exemptions granted under Governor Cuomo’s New York State on PAUSE orders.

As shown below, in a state Labor Department table, the number of new unemployment filings since the mid-March lockdown order is now approaching 2 million New York residents, or roughly 20 percent of the April labor force.

Many of these jobs will be restored in an economic recovery. The Cuomo administration’s most recent financial plan update forecast a total employment loss of 7 percent during the current fiscal year, which ends next March. To hit that estimate, the job total will have to recover 1.2 million jobs in the next 10 months.