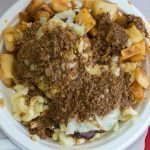 Last week’s New York state budget approval process was even more rushed, secretive, confused and sloppy than usual—stretching through Good Friday and the first night of Passover into the predawn hours of Saturday, March 31—all to meet an ultimately inconsequential April 1 “deadline” for the start of the new fiscal year and a two-week legislative recess.

The final product reflects all the care and deliberation that went into it.

From the outset of the process in January, the FY 2019 budget was distractingly packaged by Governor Andrew Cuomo within an assortment of extraneous, politically charged issues, plus several high-profile initiatives related to his ongoing political and governmental feud with New York Mayor Bill de Blasio.

From a statewide perspective, however, the adopted budget boiled down to a stand pat continuation of the governor’s existing programs and priorities, both operating and capital. The most noteworthy new wrinkles: Cuomo’s partially successful attempt to squeeze more cash out of New York’s health care sector, and his overwrought bid to circumvent the new federal cap on state and local tax (SALT)  deductions with an optional payroll tax and new “charitable” trust fund vehicles to attract deductible contributions in lieu of SALT.

As usual, crucial financial details were unclear when the Legislature voted on the final bills, and won’t be fully disclosed until the governor’s Division of the Budget (DOB) issued Enacted Budget Financial Plan at the end of the month. In the meantime, an overview of outstanding budget positives and negatives:

1. Spending growth remains (relatively) restrained. The governor claimed he had held State Operating Funds (SOF) spending within his self-imposed 2 percent cap for a seventh consecutive year, although the SOF total will now surpass $100 billion for the first time.

In reality, the increase actually was closer to 4 percent after adjusting for “timing-related actions and other changes” cited by Comptroller Thomas DiNapoli in his Executive Budget analysis. Still, even adjusting for bookkeeping gimmicks, the Cuomo era has featured a relatively flatter spending curve by historical standards, as illustrated below. 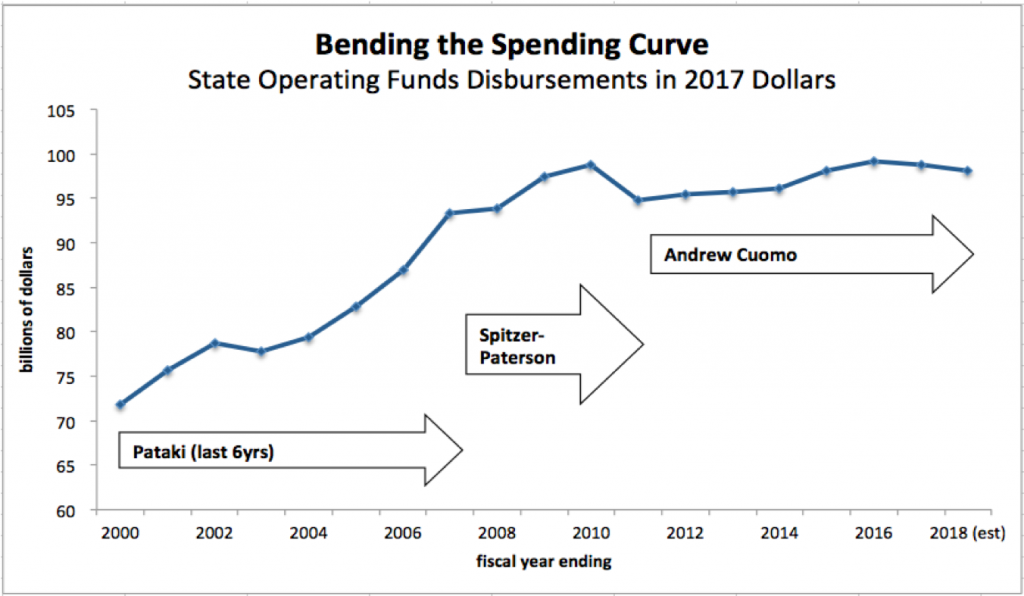 On the other hand, the $1 billion boost in school aid (on a school year basis) will serve to further expand the massive school spending base (and expectations) by another 3.9 percent at a time when statewide enrollment is continuing to drop. New York’s enormous Medicaid and related health care budget remains vulnerable to potential federal cuts, which ultimately could hinge on which party controls Congress after the fall elections.

Even assuming spending growth is held to 2 percent next year as well, the adopted budget leaves the state facing a structural shortfall of more than $800 million in fiscal 2020, according to this (previously unreleased) Senate financial plan summary.

2. Most of Cuomo’s proposed tax and fee hikes were avoided. The Executive Budget included about $1 billion in “revenue actions” that included $600 million from a series of tax and fee hikes, the largest of which would have raised $140 million by allowing the state to seize “windfall” underwriting profits of health insurance companies. He also would have deferred several major business tax credits, including incentives for brownfield cleanups and housing rehabilitation. All of these proposals failed to make it to the final budget—except for the governor’s proposed $127 million surcharge on prescription opioids, which was repackaged as a $100 million “assessment.”   (Although Senate Republicans claimed they “led the successful fight to reject $1 billion in onerous tax-and-fee increases proposed by the Governor,” the rejected tax and fee hikes totaled less than half that amount.)

On the revenue side, Cuomo’s Executive Budget also presumed that the state could reap $750 million in FY 2019, and a total of $3 billion over three years, from the conversion to for-profit status of several private, nonprofit health insurance companies. Under the enacted budget, as Empire Center’s Bill Hammond notes in this analysis, the state could reap $2 billion from the Fidelis conversion deal alone. And language in the final budget bill essentially makes that money fungible, notwithstanding the governor’s public claim that it will be used only for health care-related purposes.

1. Government unions realized their fondest desire. Buried in the budget’s all-purpose “big ugly” revenue bill was a provision designed to make it harder for state and local government employees to opt out of government union membership, an effort by unions to staunch the expected outflow of revenues in the event of an expected U.S. Supreme Court ruling for the plaintiffs in Janus v. AFSCME. In addition to allowing unions themselves to dictate narrow opt-out parameters, the provision requires public employers to allow union representatives to meet with all newly hired employees in an effort to pressure them into joining.

2.  The Legislature and Governor rejiggered their perpetual pay hike machine. A previous attempt to rig salary increases for lawmakers, statewide elected officials and agency heads was derailed in 2016 by Cuomo’s appointees to the State Commission on Legislative, Judicial and Executive Compensation, which was similarly created by the fiscal 2016 budget. The fiscal 2019 budget creates yet another “compensation committee,” this one temporary, to issue recommendations by Dec. 10 on salary levels for the Legislature, the governor, other statewide elected officials and state agency heads, to take effect in 2019. The new committee’s recommendations would have “the force of law” unless abrogated by a vote of the Legislature itself before the end of the year.

Chaired by the Cuomo-appointed chief judge of the Court of Appeals, the law creating the five-member committee would expire at the end of this year, but could be outlived by committee recommendations for up to three annual cost-of-living adjustments taking effect no later than Jan. 1, 2021. Meanwhile, that other, original Commission on Legislative, Judicial and Executive Compensation, created by the fiscal 2016 budget, would remain in existence as a vehicle for future, automatic salary hikes—circumventing state constitutional language that clearly implies the setting of state government salaries is to be solely determine by law by the Legislature, which can only raise its own pay for subsequent terms.

Members of the newly created temporary committee would also include DiNapoli (who thus would be put in the position of recommending his own pay hike); New York City Comptroller Scott Stringer; former State Comptroller Carl McCall; and former City Comptroller William Thompson. One obvious question: why are New York City’s current and former comptrollers given such an outsized role in determining the pay of the entire state Legislature?

3. Even more borrowed cash was shoveled into the capital pork barrel. It wasn’t proposed in Cuomo’s original budget or in the legislative one-house bills. Yet with no warning, explanation or justification, another $425 million was authorized for the State and Municipal Facilities program, aka SAM, raising to $2.4 billion the total appropriated for the program over the past five years. Of that amount, roughly $500 million has spent—mainly in small allocations of $50,000 to $200,000 for strictly local facilities and equipment including skateboard parks, town hall improvements, highway department garages and fire trucks. The largest SAM grants—more than $200 million in all—have been directed by Cuomo to SUNY Polytechnic Institute subsidiaries that have figured prominently in a federal indictment of Poly’s founder and former president, Alain Kaloyeros.

The budget also included two measures proposed by Governor Cuomo to “thwart” the federal Tax Cuts and Jobs Act. The problems remain the same as first noted here back in February:

1) The optional corporate payroll tax—by necessity, incredibly complicated—will have extremely limited appeal. Very few firms, if any, will opt into it. The firms that most want and need such a work-around are high-earning investment and professional partnerships, most of which are pass-through entities not covered by the corporate tax. The Cuomo administration’s inability come up with a version of the payroll tax for these entities suggests that tax officials have found it even more dauntingly complicated than the corporate version.

2) The charitable foundation gambit is less complex, easier to implement and effectively could benefit many more tax filers. However, it’s difficult to see how the Treasury Department and Internal Revenue Service (IRS) can possibly accept this work-around. It would violate long-standing IRS principles based on the voluntary nature of charitable contributions. If allowed and exploited on a broad scale, it would blow a hole in federal budget revenue estimates.

Tax preparers are unlikely to co-sign returns claiming the charitable deduction unless they can make it conditional on positive IRS guidance.  While the budget bill authorizes creation of charitable trust funds by local governments and school districts, as well, they should avoid diving into this option until the IRS response is clear.