New York State’s biggest public pension fund lost money on its investments during the fiscal year that ended March 31—a completely unsurprising result, given the coronavirus crisis and its impact on financial markets in early spring.

State Comptroller Thomas DiNapoli reported today that the Common Retirement Fund (CRF) portfolio, which feeds the massive New York State and Local Retirement System (NYSLRS) under the comptroller’s sole trusteeship, had realized a -2.658 percent return on investments last year. The fund’s total value was pegged at $194.3 billion, down from $210.5 billion in 2019.

This marked the fourth time since 2000 that the CRF has lost money in any given year, and it follows a positive but subpar return of 5.23 percent in fiscal 2019. It also drops the compound average annual return over the latest five-year period to barely 5 percent—well below the fund’s assumed 6.8 percent rate of return.

The results of the last two years make it much more likely that taxpayer-funded employer contributions will rise over the next few years, after seven consecutive years of decreases. That’s because the pension fund evaluates its assets using a “smoothing” calculation that, as described in the CRF annual report, “expects and immediately recognizes the assumed return on assets while phasing in unexpected gains and losses over a five-year period.” 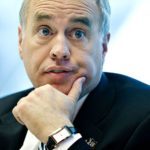 As usual, DiNapoli’s announcement of the fund’s annual investment return didn’t include any prediction about the outlook for pension costs. Even before the pandemic, however, the state Division of the Budget was forecasting that employer pension contribution rates over the next three years would rise by 17 percent for members of the Employee Retirement System and nearly 9 percent for members of the Police and Fire Retirement System. (See p. 58 of the FY 2021 Executive Budget Financial Plan).

Applied to the employer billable payroll base as of 2019, these changes would translate into a total pension cost increase of roughly $320 million for local governments and school districts across the state, not including added costs driven by scheduled salary increases. Including planned salary hikes, DOB assumes the state government’s baseline “normal” pension costs alone will increase $500 million over the same period.

Apart from investment performance, the pension contribution rate was already likely to inch up due to DiNapoli’s prudent and appropriate approval last year of his actuary’s recommendation to further decrease, from 7 percent to 6.8 percent, the assumed rate of return on CRF investments. This rate is used to discount future long-term liabilities; a higher discount rate shrinks projected long-term liabilities and thus also reduces the needed contribution rate.

Even at 6.8 percent, New York like other states is calculating its pension obligations based on a discount rate that’s too high. To earn 6.8 percent a year in an era of ultra-low returns on safe, low-risk assets such as high-quality bonds, the pension fund chases higher returns by investing nearly two-thirds of its money in riskier asset categories including corporate stocks, private equity funds and “absolute return strategies and opportunistic alternatives.” These categories have become increasingly volatile—and the latter categories harder than ever to value—in the past 20 years.

Under federal law, private corporate funds must apply a much lower pension discount rate. Likewise, government pension funds in other countries also are far more conservative. For example, Canada’s highly regarded Ontario Teachers Pension Plan, similar in size to the New York CRF, currently discounts future liability at a rate of 4.65 percent. As the OTTP explains in its report:

The discount rate must be realistic to avoid masking plan funding issues that could impact future generations of retirees and plan members. For example, if the assumption is too high and investments earn less than expected, a funding shortfall could result, requiring younger and future plan members to contribute more to the pension plan, receive lower benefits, or both. If the assumption is too low, current members could pay more than necessary for their pensions or benefits may be reduced more than necessary.

New York’s CRF paid out $13.5 billion in benefits last year, DiNapoli’s announcement said. Previous annual reports indicate annual benefit payments rose at a 27 percent rate in the last five years (up from $10.4 billion in 2015), while pension fund assets grew in the same period by a net 5 percent (to $194 billion from $184 billion).

DiNapoli’s release stressed that the fund was “ranked by Pew Charitable Trusts as the second best-funded pension fund in the nation with a funding ratio of 98 percent.” This is not misleading—New York’s CRF is among the best-funded public plans in the nation—much, much stronger than the nearly broke pension system of Illinois, for example. However, given the accounting norms, this boast is strictly relative. DiNapoli also emphasizes that pension plan members’ retirements are “secure”—which, of course, they must be under the anti-diminution clause of the state Constitution. That security must be guaranteed, no matter what, by taxpayers.

Meanwhile, New York City pension funds have yet to report investment returns for their 2020 fiscal year, which ended June 30. Given the stock market rebound in April and May, their return was likely to have been positive, but probably ended up well below their assumed 7 percent discount rates.

As of May, one month before the close of the year, city Comptroller Scott Stringer’s office reported year-to-date returns ranging from a high of 3.64 percent for the tiny Board of Education Retirement System to just 1.71 percent for the New York City Employee Retirement System, (NYCERS), which is the largest of the municipal group. The city’s police, firefighter and teachers retirement systems all had returns through May of less than 3 percent.

At current pace, NY is still years away from pre-Covid payrolls peak