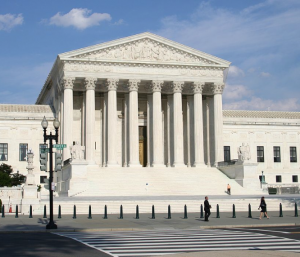 Public-sector labor unions dodged a bullet Monday when the US Supreme Court refrained from overturning laws that force government employees in many states to pay fees to unions they don’t want to join.

That’s because the Supreme Court effectively nullified laws in more than a dozen states — including New York, New Jersey and Connecticut — that have allowed the unions to organize private, home-based service providers whose jobs are subsidized with public funds.

Unions across the country had been eying such informal caregiver networks as their final frontier for building membership rolls and political influence.

Now, it appears, that frontier is closed for good — at just the moment when unions might have hoped to persuade allies such as Mayor Bill de Blasio to exploit it.

Ruling in an Illinois case, the Supreme Court said that state could not deduct an “agency fee” — the equivalent of union dues — from payments to Medicaid personal-home-care assistants who choose not to join a state-designated union.

In past cases, the court has allowed unions to collect such fees from government workers covered by a union contract, even if they refuse to join the union.

However, writing for the majority in the Harris case, Justice Samuel Alito said union agency fees can’t be collected from workers who are not “full-fledged public employees.”

The decision has implications for tens of thousands of home-based child-care workers who were initially roped into public-sector unions under executive orders issued by New Jersey’s then-Gov. Jon Corzine in 2006 and New York’s then-Gov. Eliot Spitzer in 2007.

The providers are essentially independent contractors, subsidized by government grants but chosen by parents or patients. Some child-care workers are licensed; others are friends or relatives of the low-income working moms whose kids they watch.

In New York, about 32,000 child-care providers in New York City were organized by the United Federation of Teachers, while 15,000 providers in the rest of the state are represented by the Civil Service Employees Association.

In January 2012, the state began directing local social-services agencies, which administer subsidized day care for low-income parents, to begin deducting up to $690 a year in union dues or agency fees from provider payments.

It’s not as if the providers were clamoring for union representation, though.

In New York, only a minority of the providers even voted in the union representation elections, which were conducted by mail, according to Jennifer Parrish, a spokeswoman for a Minnesota-based group of child-care providers opposed to unionization.

New York’s law makes it clear that, like the Illinois group affected by Monday’s ruling, the child-care workers roped into UFT and CSEA do not have an “employer-employee relationship” with the state or its subdivisions, and are not entitled to public-sector retirement or health benefits, and are not subject to indemnification if sued.

From the unions’ standpoint, that turns out to be an Achilles heel. The existing court precedent “has clear boundaries; it applies to public employees,” Alito wrote.

So what happens now? Assuming the Harris decision does apply, and that home-care and child-care workers don’t have to pay agency fees, the UFT alone stands to lose millions of dollars, perhaps more than $10 million, in annual revenue.

While providers get to keep more of their hard-earned money, taxpayers also will be relieved of the added burdens driven by sweetheart deals with labor.

And at bottom, the case also involves a more fundamental issue of constitutional rights — because unions spend so heavily on political advocacy, i.e. “speech.”

“If we accepted Illinois’ argument, we would approve an unprecedented violation of the bedrock principle that, except perhaps in the rarest of circumstances, no person in this country may be compelled to subsidize speech by a third party that he or she does not wish to support,” Alito said.

It’s not as if the public employee unions in the tri-state area don’t already speak loudly enough without compulsory subsidies.

After Janus, what now? What the Supreme Court’s major labor decision means for New York