The Empire State is next to last — just above California — in a new ranking by corporate chief executive officers of “Best and Worst States for Business.” 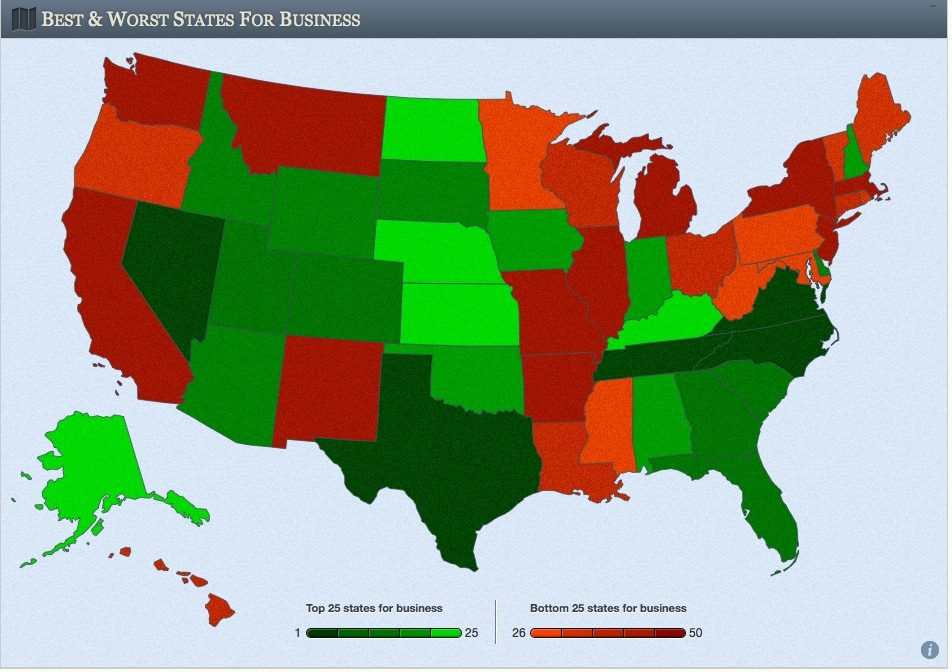 Chief Executive magazine based its ranking on a poll of 556 CEOs using criteria including taxes and regulations, workforce quality and living environment. As explained in the article’s Methodology section, “In most companies, the CEO makes the ultimate decisions about where to locate and/or expand the business, making his or her perceptions of each state critically important.”

New York’s ranking largely reflected negative CEO impressions about its tax and regulatory environment–a negative that also has dragged down the state in other regular rankings of state business climates.

From the main article in Chief Executive:

Not surprisingly, states with punitive tax and regulatory regimes are punished with lower rankings, and this can offset even positive scores on quality of living environment. While state incentives are always welcome, what CEOs often seek are areas with consistent policies and regulations that allow them to plan, as well as intangible factors such as a state’s overall attitude toward business and the work ethic of its population.

Besides New York (49) and California (50), other “worst” bottom-dwellers included Michigan, New Jersey and Illinois at 46 through 48, respectively. Neighboring Connecticut was 44, and Massachusetts 45.  At the opposite extreme, Texas was ranked the nation’s best state for business, followed by North Carolina, Florida, Tennessee and Georgia.

Chief executives are apparently impressed by Wisconsin’s move to get control of public-sector bargaining costs through an overhaul of collective bargaining privileges. The Badger State’s ranking improved in one year from 41 to 24.  Indiana improved from 16 to 6.  Chief Executive suggests those state have benefited from policies driven at the gubernatorial level.

In his move to end public sector collective bargaining to get control of the state’s budget, Wisconsin’s Scott Walker made (New Jersey Governor) Chris Christie appear reasonable. Indiana Governor Mitch Daniels slowed state government payrolls to the point where Indiana has the nation’s fewest state employees per capita. In addition, while at least 35 states raised taxes during the recession, Indiana cut them.

Illinois, which just imposed a massive tax increase but is still going broke, has dropped 40 slots in just five years.

New York’s ranking, on the other hand, hasn’t changed much in five years.  So give Albany credit for consistency.