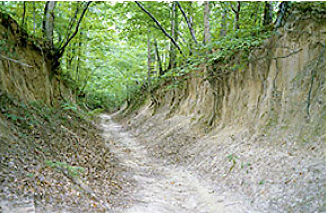 So, what to make of this Tier 6 pension thing?  Is it truly “bold and transformational” ?

Uh, no. Suffice to say, Governor Cuomo’s hyperbole machine is in overdrive today.

Tier 6 is a net positive from the standpoint of taxpayers, however. The bill passed by the Senate and Assembly in the predawn hours today creates a new pension plan that is about one-third less costly than the current plan.  It will save money principally by shifting costs to employees, through an increase in pension contributions deducted from their paychecks.  As explained in this earlier post, there also will be a relatively small reduction in benefit levels, compared to those provided under Tier 5.

Those enormous 30-year dollar savings attributed to Tier 6 (totaling $80 billion, the governor says) need to be viewed in a larger context–and taken with a grain of salt.  This much has been clear from the moment Cuomo unveiled his Tier 6 proposal:

Concerning that second point: since World War II, there has never been a 30-year period in which the Legislature has not tinkered with New York’s public pensions, either on a wholesale basis or for targeted occupations and bargaining units. Under the state Constitution, benefit reduction can only apply to future workers, while benefits for current employees (in whom unions take the greatest interest) can only go in one direction: up.

History would suggest that as long as the traditional defined-benefit pension structure remains in place, changes will occur.  Some of these changes, sooner or later, will be designed to undo what has just been done. The governor himself has suggested as much, repeatedly, saying just two weeks ago: “You can always raise the pension benefits. You know, three years from now, let’s say the economy turns around and people say we want to have a better pension plan to attract different workers, then raise it, fine.”

In other words, we can’t actually take that $80 billion to the bank. As for New York City’s purported $21 billion share of the long-term savings, keep in mind that the city is already spending over $8 billion a year on pension contributions, and Comptroller John Liu has cited estimates by actuarial consultants that the city will spend a total of $359 billion on pension contributions over the next 30 years.  Tier 6 will cut that amount by 6 percent.

Meanwhile, three big pieces of the original Tier 6 reform fell off the table:

On the plus side, the Tier 6 bill includes a DC option for non-union employees who earn more than $75,000 a year. This benefit will be available throughout state and local government in New York. As the governor’s release points out:

In the modern economy, employees often change jobs multiple times and need pension portability. Many states, the federal government, and most private employers provide some form of defined contribution plans to their employees. The state will make an 8% contribution to employee contribution accounts. Currently, SUNY and CUNY offer such an option through TIAA-CREF that has been successful and popular. This is a voluntary option for those employees who prefer the portability and vesting feature not available with defined benefit options, and will help attract top talent to state government.

Giving more employees access to the SUNY and CUNY plans might be seen as a tiny opening to fundamental change.  Unfortunately, the current governor and Legislature clearly have no inclination to push the door open further, even though a solid majority of the largest group of public employees in the state would like the same option.

There’s one more, widely overlooked piece of the pension bill that might actually qualify as “transformational,” but not in a good way from the taxpayer’s standpoint.

Near the end of the bill are three curious sections headed “Benefit Enhancements.” These essentially give all public employee unions, except those representing police and firefighters, an avenue to petition for the right of their Tier 6 members to retire at age 57 after 30 years — essentially a global early retirement option.  Consider these provisions, which apply to unionized state government employees: 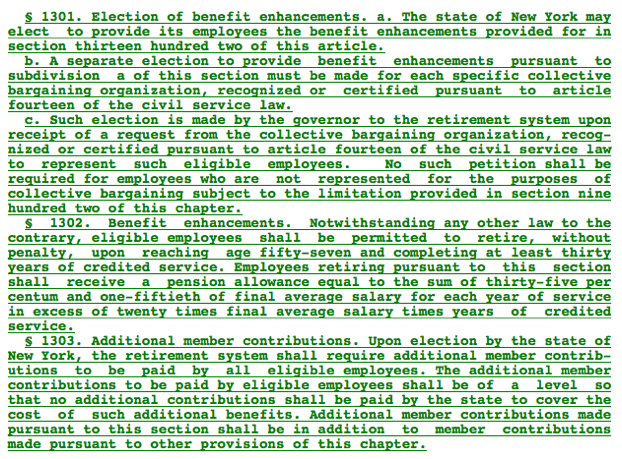 An almost identical section follows, allowing the governor to approve the same benefit for members of the New York State United Teachers — that is, NYSUT specified by name, with no input required from school districts, by the way.  A third section sets up the same process for New York City, with the mayor given power to make the “election” for benefit enhancements for members of all non-police, non-fire unions.

That last paragraph (section 1303) is key: it says the cost of the added benefit shall be covered entirely by “additional member contributions.” The problem is that these additional contributions will be calculated on the basis of the pension systems’ usual fallacious assumptions (assuming investment returns of 7 to 8 percent a year, depending on the fund). As with previous early retirement legislation, this will under-price the benefit and could lead to substantial unfunded liabilities in the future.

These provisions are highly questionable, to say the least. It’s not difficult to foresee a circumstance in which a governor or mayor will use this power to his or her own short-term political benefit, with potentially costly long-term consequences. Did groggy lawmakers seriously think about the precedent they were setting before they voted for this?

The fundamental flaw in New York’s public pension system remains unresolved: like similar systems across the country, it exposes taxpayers to massive open-ended financial risks.  Pension accounting is incredibly arcane and opaque, setting up a proven moral hazard for elected officials who customarily have little regard for long-term consequences.  Unfortunately, the governor did not address this problem, or even acknowledge it.