New York State’s post-pandemic jobs recovery has come a long way—but still has far to go, according to the state Labor Department’s employment report for May.

On a non-seasonally adjusted basis, the statewide private-sector payroll job count swelled last month to just under 7.5 million, up 13.2 percent from the (historically deflated) level of the same month a year ago. Nationally, private employment in May was up 10.4 percent, according to initial estimates from the Bureau of Labor Statistics.

Those numbers are a bit misleading in isolation, however.

New York’s job loss last spring was much worse than the national average—bottoming out in April at nearly 23 percent (-1.87 million jobs) below the prior year’s level, compared to a national decline of 15 percent in the same period. As of last month, the U.S. private job count of 123.4 million was just 3.8 percent below the May 2019 level, while New York’s total was still down 10 percent from two years ago. To put it another way, in employment terms, New York has come a bit more than halfway back—still 825,000 jobs below its employment level in the comparable “before time” of May 2019.

Measured monthly on a seasonally adjusted-basis, statewide private-sector employment in New York was up 0.24 percent in May, barely half the national monthly increase of 0.4 percent. Although it represented a slowdown from the January through April monthly pace, New York’s 0.24 percent increase last month was strong by longer-term historical standards—considerably above the state’s average monthly increase in private jobs during the 20 years leading up to the pandemic.

The chart below illustrates the seasonally adjusted growth in private employment for both New York and the nation as a whole starting in January 2010, the end of the Great Recession. As shown, New York kept pace with the nation for almost all of this period, but was slowing down slightly even before the sickening drop after Governor Cuomo ordered a pandemic lockdown in March 2020. 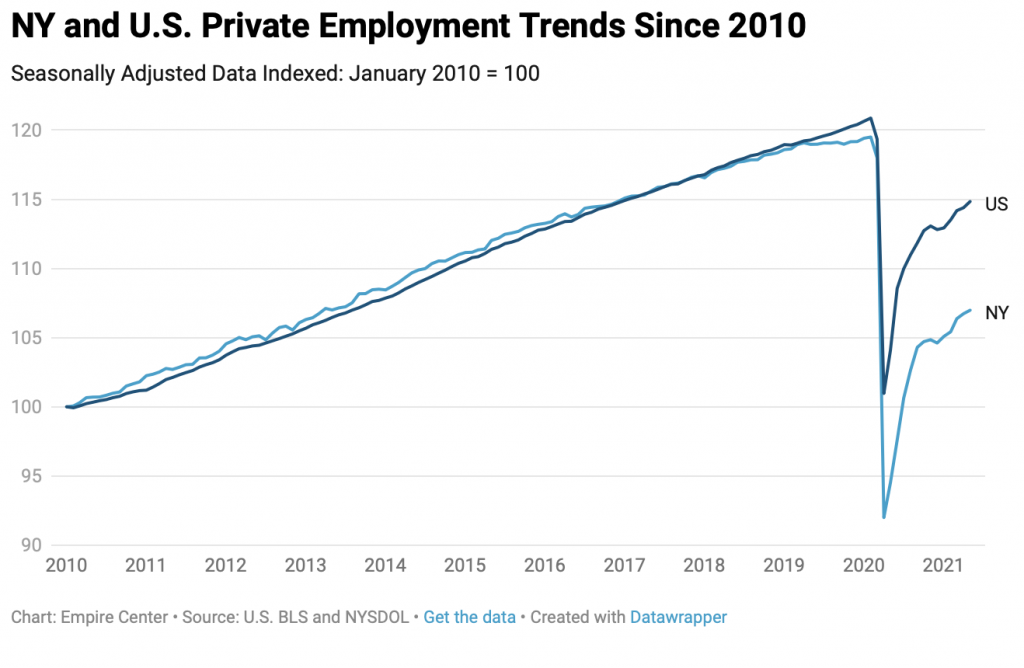 This week’s lifting of most Covid-related restrictions on commercial operations and gatherings should boost New York’s growth prospects. However, even if the state keeps steadily adding private payroll jobs at May’s pace, private employment in New York won’t recover to the February 2020 level until April 2025. Even steady monthly employment growth at twice the May rate won’t produce a full private jobs recovery until the spring of 2023.

The table below from the state Labor Department report shows the breakdown of private employment growth on a regional basis.   As with the statewide year-over-year numbers, those percentage changes are somewhat misleading, given the very low 2020 starting point.

For example, while private employment in Buffalo-Niagara Falls was up a very impressive 17.4 percent in May, it remained more than 6 percent below the May 2019 level. In fact, the current (improved) Buffalo payroll job count is roughly the same as in May 2011. 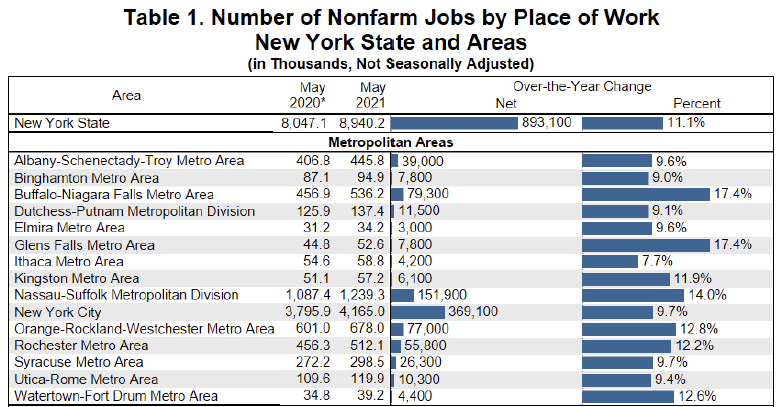