New York residents will pay almost $90 billion in added taxes over the next two years if the federal government plunges over its fiscal “cliff” with no changes to current law, according to a timely report issued last week by Comptroller Thomas DiNapoli. The scheduled tax changes outweigh the impact of scheduled “sequestration” cuts to federal spending, which would cost the state and local governments $5 billion over the next nine years, including a $600 million hit to the state budget in fiscal 2013.

No one really expects all of these things to happen, of course — but the comptroller’s estimate provides a valuable illustration of key tax issues at stake in the current cliff-avoidance negotiations between President Obama and congressional Republicans.  Nearly half the tax increase, and nearly one-third in 2014, would result from an automatic expansion of the Alternative Minimum Tax (AMT), which already hits New York harder than almost any other states.  The number of New York filers affected by the AMT would increase from about 500,000 under current law to more than 3 million if the temporary annual “patch” on the AMT is not extended, the comptroller’s report says.

Nearly $15 billion in tax increases on New Yorkers over the two-year period would come from expiration of a temporary cut of two percentage points in the Social Security payroll tax.  Virtually all of the other increases would result from the expiration of the tax cuts enacted under President George W. Bush in 2001 and 2003.  The Bush tax cuts slashed rates across the board on “ordinary” income, coupled with deeper cuts in capital gains and dividends. It also expanded the child credit from $500 to $1,000 per child.  The net result was an especially large tax cut for New York.

This table from the comptroller’s report provides a summary of the tax impacts if current federal law were left unchanged. 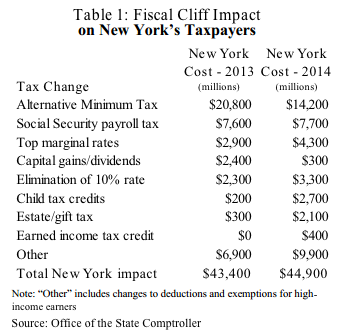 Again: Congress and the President inevitably will agree on some compromise to avoid these increases before they fully unfold.  But given the Empire State’s high concentration of investors and “wealthy” households (in Obama’s definition, those earning $250,000 or more), New York will be hit disproportionately if the final deal is largely on the President’s terms.