It was Mark Twain who supposedly said “no man’s property is safe when Congress is in session” — a concept that a surely extends to the New York State Legislature as well. In that spirit, here’s something to celebrate on the Fourth of July: the Legislature not only left Albany on schedule June 21, it passed fewer bills this year than in any regular session since 1914, according to an analysis by New York Public Interest Research Group (NYPIRG).

The 571 bills passed by both houses before the regular session adjourned were less than half the average during the 1960s, the decade in which the Legislature was most hyperactive. Perhaps not by coincidence, the ’60s — heyday of Rocky in Albany and LBJ in DC — also had the most lasting negative impact on the state’s economy and finances in the long term.*

Sure, what ultimately matters isn’t the quantity of legislation but its quality (or lack of it). Acknowledging the pressing need for statutory changes that would make New York a better place to live, work and do business (mostly by repealing stuff like this), when it comes to the New York Legislature, the general rule might be less is better.

For the history-minded, here’s a nifty chart from NYPIRG of bills passed by both houses since 1920: 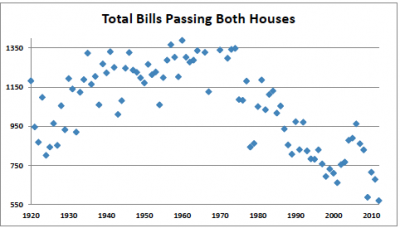 * PS — From the NYPIRG analysis:

In 1969, one of the years with the highest number of bills passed, the budget was 577 pages. In 2012, it was 2,890. While much of this increase is due to the dramatic growth in government spending, there appears to be a trend toward including a greater number of issues in the annual budget’s appropriation and Article VII bills, thus increasing the length of the budget bills and reducing the number of policy changes which may have passed as separate bills.