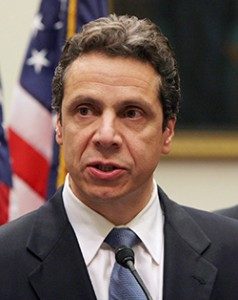 In a just-completed radio interview, Governor Andrew Cuomo talked a little more about his State of the State announcement last week concerning a proposed new convention center at Aqueduct Raceway in Queens. The Genting Group, the Malaysian multinational that operates state-franchised racino at Aqueduct, has signed a non-binding letter of intent to privately finance a convention center and exhibition hall at the site. This, in turn, would make possible the redevelopment of the Javits Convention Center on the West Side of Manhattan.

But Cuomo’s answers raised a few other questions. For example, Genting promised to “work alongside the MTA (Metropolitan Transportation Authority) to help fund and introduce uninterrupted subway service between Midtown Manhattan and the New York International Convention and Exhibition Center,” an idea Nicole wrote about here last week.

Cuomo today noted that JFK Airport (more specifically, a bus stop a few hundred yards from the closest JFK terminal) used to be served by Metropolitan Transportation Authority (MTA) subway service known as “The Train to the Plane.”  It was dropped due to lower ridership in the early 1990s.

“The Genting organization is interested in reinstating that service at their cost if there’s a shortfall to the MTA,” the governor said.

Hmm.  What does “shortfall” mean?  After all, it’s not as if the MTA runs anything at a profit.

While the State of the State and follow-up spin treated the convention center as a virtual free shot, the governor said today it would involve a “minimal” cost to the state.  What does “minimal” mean?  Would this be limited to the MTA investment in the train line, or include other things?

Cuomo said state legislative approval would be required for expansion of the racino, which Genting requires to undertake the 2.6 million first phase of a planned hotel, convention and exhibition center. Presumably, the most pertinent questions surrounding the deal will be addressed when the proposal moves into the always-methodical and transparent realm of the Capitol.