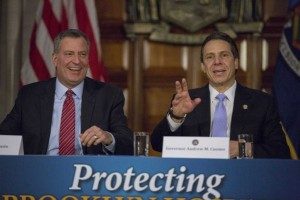 Cuomo, during a meeting with the Daily News Editorial Board, said he is looking to cut taxes next year — not raise them — arguing it’s important that the “arrow is pointed down.”

He argues the tax rate for all New Yorkers is lower now than when he took office. And even if the 41,000 mostly city residents earning more than $2 million are not ecstatic about paying a state income tax rate of 8.82%, “they feel better that the arrow’s pointed down.”

“What they fear is that they’re in a place where the taxes will continually go up and there will be a ceiling and they’ll say, ‘I’m going to Florida,’” he said of the wealthy. “I believe that.”

The governor noted he and the Legislature extended the [higher] state tax rates earlier this year through 2017.

“If (de Blasio’s) elected and if he comes to Albany, he can make his case and we will hear him out and let’s have a fulsome discussion, but this is a conversation we just had,” he said of the income tax rates. [emphasis added.]

Actually, there was no public “conversation” to speak of surrounding the three-year extension of higher income tax rates this year.  It surfaced out of nowhere quite late in backroom negotiations on the 2013-14 budget .  The tax hike was not scheduled to expire until the end of 2014, and the revenue it generates was not needed to balance the budget — but it conveniently helped pay for a dubious, politically motivated election-year “family tax credit,” and it took the tax-hike issue off the table for Cuomo’s re-election campaign.