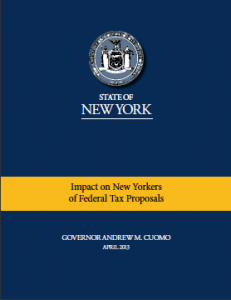 President Obama’s proposed cap on itemized federal income tax deductions for state and local taxes would cost New York residents $3.8 billion a year, according to a report released by Governor Cuomo’s office today. However, you’ll have to dig a little to find that number: Obama isn’t mentioned until page 11 of the 26-page document.

The opening section of the report (which is, by the way, useful and well-researched in most respects) focuses on how bad it would be for New Yorkers if the federal government were to completely eliminate the deduction for state and local taxes. However, no one in a position of authority in Washington is actually proposing such a thing. The much more more serious risk to New York is that the White House and Congress will agree to some form of limit on itemized deductions for high-income taxpayers, as Obama proposed in his budget last week (reviving a proposal he first trotted out three years ago).

For all the talk of polarization in D.C. these days, Obama and the GOP don’t actually differ much on this point. Both are willing to tightly curtail if not eliminate tax breaks at the top end, of which the state and local tax deduction is among the largest. What keeps them apart is a Republican desire to accompany any broadening of the tax base with a reduction in rates.  But if a “grand bargain” ever materializes between Obama and Speaker John Boehner, it’s not difficult to picture congressional Republicans (dominated by representatives from low-wealth, low-tax states) agreeing to a deal that targets the state and local tax deduction for the wealthiest households

Any variation of an exemption cap targeted at the top brackets would have the greatest impact on states combining large numbers of high-income payers with steeply progressive state and local income taxes — particularly New York and California. New York’s tax base alone, including commuters from neighboring states, would generate 30 percent of any added federal revenues generated by such a move, federal tax data indicate.  If the federal tax code is changed in a way that makes New York even less competitive, it will affect the willingness of people to earn income here, not just to live here. This equates to a bigger overall hit on Albany’s fiscal foundation–the highest-earning 1 percent, who this year will generate about 43 percent of the total state income tax.

Although conservatives have been gunning for the state and local deduction since the Reagan era, when its elimination was fended off by a previous Governor Cuomo, a strong case can be made for retaining the deduction on both historical and federalist grounds, and Cuomo’s report today makes that case fairly effectively. Unfortunately, it’s difficult to sympathize with a governor who issues a press release warning of a potential “double tax” just weeks after extending a supposedly temporary state  tax hike on the same people who would pay the most in added federal taxes if something like the President’s proposal is ever adopted.