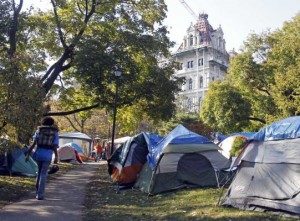 Just a few weeks ago, Gov. Andrew Cuomo was trying to get the “Occupy Albany” tent people arrested.  This week, he hasn’t just caved to their main demand—he’s also begun to sound more like them.

As noted here the other day, the governor has begun to spout the kind of misleading descriptions of the state income tax code favored by Occupy participants and other tax hike advocates. The trend continues in today’s blast email from the Executive Chamber, touting Cuomo’s tax-hike deal with the Legislature.

The subject line is “Restoring Fairness to Our Economy,” a theme repeated in the heart of the message:

Governor Cuomo is proposing a bold and innovative plan to stimulate our economy, create jobs, and restore fundamental fairness to our economic system. [emphasis added]

So in other words, just as the Occupy tenters claim, our economic system is currently “unfair.” **Not just “unfair” but fundamentally unfair.** Except … now, Cuomo is going to change that. Specifically, in one fell swoop, he will “restore fundamental fairness” to the economy through the “bold and innovative” expedient of (a) extending a $2.6 billion income tax hike on high-income earners, (b) redistributing $690 million of the proceeds in a helicopter drop to the middle-class, and (c) spending a comparatively measly $100 to $150 million on regional flood relief and a jobs program for low-income teens.

And then there’s this, from the same email:

The state’s current tax code places an undue burden on our middle class. With the Governor’s reforms, 4.4 million New Yorkers would receive a tax cut, including a reduction of hundreds of millions of dollars for middle class taxpayers. [emphasis added]

Taxes should be lower, to be sure. But as for where the burden falls, consider the following 2011-12 Executive Budget chart depicting the distribution of taxpayers, tax liability and income as of 2008, the last year before the massive temporary “millionaire tax” was enacted:

These figures, mind you, are from a year in which incomes in the top brackets absolutely tanked.

Note: the burden doesn’t become “undue” — i.e., percentage tax liability exceeding percentage of filers and AGI — until income hits $100,000. Effective rates for households with incomes in the low six-figures, which would count as middle class by downstate standards, were driven up by the enactment 20 years ago of New York’s unique “benefit recapture” provision.  But Cuomo’s vaunted tax reform won’t fix it.

And here’s a chart (from 2006 tax department data) showing the undeniably progressive distribution of the state income tax across payers of all types: 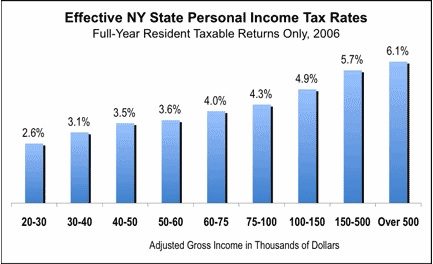 In fact, New York State’s permanent code, the one Cuomo implies has been “unfair,” is actually among the most progressive in the nation — not just according to the respected centrist group Icited in this post, but to the left-of-center authors of this study, which includes this chart (from page 3): 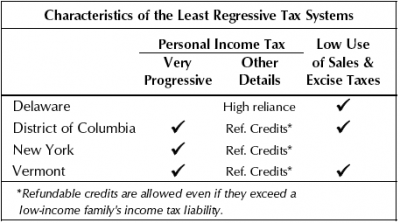