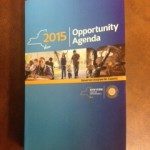 Governor Andrew Cuomo’s combined State of the State and budget message today included a promise to make permanent the historic property tax cap enacted at his initiative in 2011.

Under current law, the tax cap is awkwardly linked to continuation of New York City’s rent control laws, which are due to expire in June. The cap can stay in effect beyond June 2016 only as long as rent control statutes are extended (probably and presumably, that is).

Late in last year’s campaign, Cuomo pledged to extend the cap without clarifying whether he meant to have it last beyond his own tenure. Today he seemed to clear up that question.

The wording in the State of the State “book,” as opposed to the budget message, is short, but unequivocal:

“The Governor’s property tax cap has delivered billions of dollars in relief to New York’s homeowners. The cap is set to sunset in 2016. Governor Cuomo will propose that the legislature makes the cap permanent, to continue protecting New York taxpayers.” 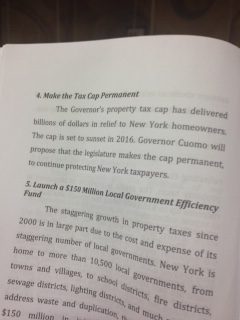 If Cuomo follows through, it will be great news for New York property owners, homeowners and businesses alike. The cap has already had a dramatic impact on the spending behavior of local governments, especially school districts. Assuming Cuomo successfully proposes erasing the tax cap sunset date — with no other caveats or conditions — he will have assured that he leaves behind an enduringly positive legacy for New York local taxpayers.

PS — No legislation making permanent the cap is included in budget documents posted late this afternoon, at least at first glance. But the cap is not really part of the budget, nor does it need to be. The big question ahead is when and how Cuomo will seek to address the issue: in a separate program bill, or as a condition for extending rent regulations, or … what? Nonetheless, the promise has now been made. He now needs to deliver on this signature issue. (Senate Republicans previously have taken the same position in favor of tax cap permanence, by the way.)

PPS — It’s really this simple: as in 2011, Senate Republicans back the cap, and Assembly Democrats need to extend the rent control law.  The governor, joined by the Senate, can make a permanent cap a condition for agreeing to the rent control extension.  This is all the leverage Cuomo needs to get this done, once and for all.