Starting next year, New York’s state government plans to (finally) stop deferring a portion of its annual required pension payments—but over the next 10 years, it will still have to repay $3.3 billion it owes on pension fund borrowings since fiscal 2011.

From fiscal 2017 to 2021, as illustrated below, the state expects to pay the New York State and Local Retirement System (NYSLRS) an additional $432 million a year to repay previous pension deferrals, an amount that will decline steadily before ending after 2026, according to data in the Mid-year Financial Plan Update. The report was posted by the Budget Division late Thursday—six days past the statutory deadline. 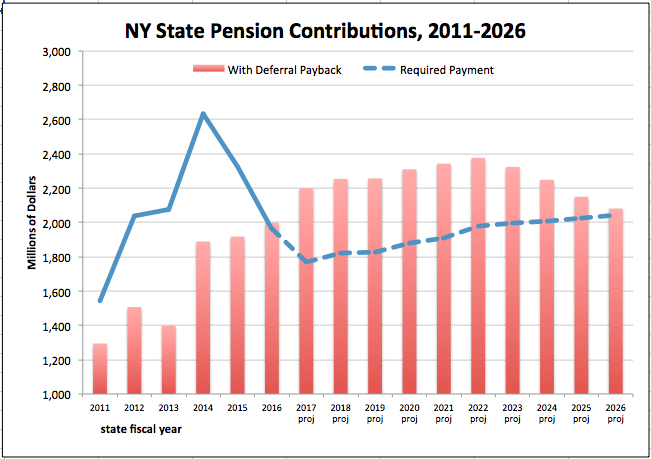 Instead of making its fully required pension payment, the state effectively has borrowed a total of $3.6 billion from NYSLRS since fiscal 2011, including $350 million in fiscal 2016, which ends next March 31, the financial plan update says. Through this year, it will have repaid about $1 billion, leaving it still owing $3.3 billion, including interest.

This pension gimmick was first allowed under a 2010 law proposed by Comptroller Thomas DiNapoli and signed by former Governor David Paterson. As recently as the summer of 2014, Cuomo was assuming the state would resume making its full required pension contributions, as well as scheduled payments on past deferrals, starting in fiscal 2016. But that changed after the pension fund adopted a new “mortality table” reflecting the longer lifespans—and therefore greater benefit expense—of younger retirees and current workers.

Last month, DiNapoli approved more changes to pension actuarial assumptions that, taken together, will have the effect of slightly lowering the pension contribution rates in the coming decade. Based on those changes, Cuomo has dropped his plan to borrow more, effectively reverting to what he had been intending to do until year ago.

Confused? You’re not alone. The complexity of a traditional defined-benefit pension plan makes it prone to manipulation of this sort.

The main thing to remember is that all this is all fraught with risk. If the pension fund falls short of its average annual investment return target of 7 percent over the next few years, the state’s pension costs would go up. Say, for example, that within the next three or four years, the stock market actually experiences a downturn even half as bad as the 2007-09 crash. In that case, pension contributions would rise sharply again before the state is even done paying what it borrowed in the aftermath of the financial crisis.