Thanks to a last-minute bill language tweak sought by police and firefighter unions, Governor Andrew Cuomo’s watered-down “reform” of New York’s compulsory arbitration law will not apply to a number of unsettled contracts that hadn’t even reached the arbitration stage before the law was extended just before the Legislature adjourned last month. Public Employment Relations Board (PERB) records now indicate that up to two dozen contract disputes may have been carved out of the new law (Ch. 67 of 2013), with the full impact ultimately depending on how many of these employers are considered fiscally distressed enough to otherwise qualify.

Cuomo has claimed that the arbitration change ”will improve the process and help municipalities continue to protect the public’s safety while balancing the interests of their taxpayers.” However, because the governor caved to union demands in the final week of the session, the full measure of those purported (and debatable) benefits won’t immediately flow to taxpayers in some of the state’s most distressed localities — including Suffolk County and the cities of Gloversville and Syracuse.

First enacted in 1974 and regularly extended ever since, the arbitration law has done much to drive up and lock in police and firefighter compensation costs across the state.  However, with the law set to expire June 30, Cuomo entered this year’s legislative session in a commanding position to insist on sweeping changes as his condition for keeping the law alive, assuming he’d agree to any extension.  Cuomo initially took a step in the right direction by proposing 2013-14 budget bill language that would have imposed a 2 percent cap on the total value of arbitration awards — establishing a link between a big local cost item and the new property tax cap. Something similar was done in New Jersey a few years ago.

But after the Legislature predictably balked at the arbitration cap, the governor spent the rest of the session seeking a deal that would do more to placate unions. He ultimately came up with one as part of his financial restructuring bill, which extends arbitration for three more years while requiring arbitrators to give heavier weight to a government employer’s government’s “ability to pay,” including the impact of the tax cap. It also would require arbitration panels to “recognize and take into account … the constraints, obligations and requirements imposed by” the state’s property tax cap.

As explained here last month, there are the two problems with this approach:

In addition, like the governor’s original proposal, the change is limited to local governments in fiscal trouble, as measured by tax levels or budgetary reserves.

The agreed-upon bill language posted on the governor’s website on the morning of June 18 affected all collectively bargained or arbitrated settlements that expired before April 1, except for disputes in which either party had formally petitioned for PERB arbitration by June 14. But hours after the original bill was released by the governor’s office, that paragraph was expanded with wording that also excludes from the law any dispute in which either party formally filed a declaration of impasse with PERB before June 14. Under the Taylor Law, impasse is the stage before arbitration.

Syracuse city officials quickly confirmed that the carve-out would affect that distressed city’s unresolved contract negotiations with the Syracuse Firefighters Association, which filed an impasse declaration with PERB on May 20.  It turns out that, in addition to Syracuse, PERB records indicate another 23 unions in other counties, cities and towns, as well as two large public authorities, had filed impasse declarations before the deadline. A complete list follows: 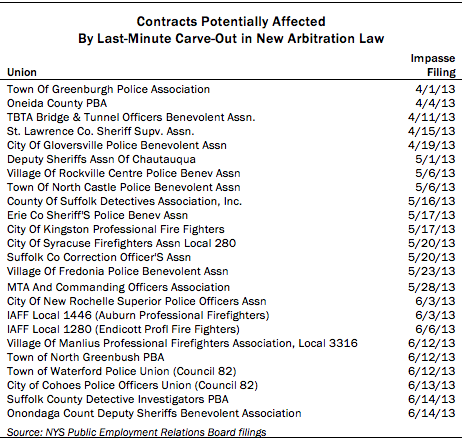 As shown above, most of the impasse declarations were filed by unions within a month of the arbitration law’s expiration–and two, involving detective investigators in Suffolk County and deputy sheriffs in Onondaga County, were filed on the last possible day to be exempted from the new laws.

Other unions protected by the carve-out include the PBA in the Village of Rockville Centre, home base of Senate Republican Leader Dean Skelos. Rockville Centre cops, among the best-paid in the state, scored a big win in their last arbitration just a few months ago.

If Rockville Centre is fiscally responsible enough to maintain even a modicum of budgetary reserves, it may not have been affected by the new arbitration language in any case.  The logic of the law is that you can’t catch an added break until, thanks to arbitration, you are actually broke.