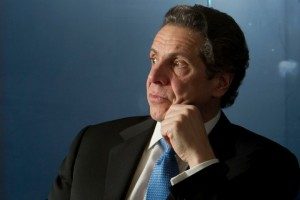 In his State of the State message last week, Gov. Cuomo once again cited the new Tappan Zee Bridge as a symbol of his ability to move forward on big, important infrastructure projects. But the governor hasn’t leveled with commuters and truckers on what they’ll be paying for this progress. Hint: a lot more than they do now.

In fact, Cuomo’s “New New York Bridge” bears all the earmarks of Albany’s age-old willingness to kick cans down the road. A full year after construction officially began, there’s still no detailed financing plan for the $4 billion project.

The existing Tappan Zee Bridge generates $130 million a year in tolls, 20 percent of all annual toll revenue collected by the state Thruway Authority, which owns the obsolete and costly-to-maintain 58-year-old structure

Tappan Zee tolls are now $3 to $4.75 for E-ZPass-equipped passenger cars, and much higher for trucks and buses. To fully fund the new bridge, it’s been estimated, tolls might have to triple. Indeed, the Thruway Authority already has budgeted a 50 percent hike in its systemwide “toll revenue target” over the next three years.

However, when one of Cuomo’s top aides suggested in August 2012 that the Tappan Zee car toll might ultimately rise to $14, the governor was quick to distance himself from the idea, saying, “At the end of the day, we have to make tolls affordable.”

Sixteen months later, we still have no answer to that question. In fact, even as pile drivers bang away at new bridge supports next to the existing span, the Cuomo-controlled Thruway Authority has been bending over backward to avoid issuing a plan explaining how the bridge will be paid for.

While the feds recently approved a $1.6 billion Transportation Infrastructure Finance and Innovation Act loan to help fund the project, the state won’t touch that money until construction is supposed to be finished.

Instead, the Thruway Authority has begun issuing its own bonds to cover up to $1.6 billion in construction costs over the next 5½ years. Agency officials pointed out that, while the federal TIFIA loan carries an attractive interest rate below 4 percent, the authority’s own bonds are a cheaper interim financing tool in today’s ultra-low-interest-rate environment.

But there’s also another reason the state might prefer this approach: Before the authority can draw a dime of TIFIA cash, the feds want to see two years’ worth of future toll schedules.

It seems clear the Thruway Authority and its ultimate boss — Cuomo, who’s seeking a second term this year — would rather postpone that day of reckoning for as long as possible.

Aside from that initial $1.6 billion, the Thruway Authority has yet to specify how it will cover the remaining $2.4 billion or so cost of the new bridge. Instead, it’s telling bond investors that added funding might come from “a below-market financing program managed by a state public-benefit corporation.”

Exactly what that means is anyone’s guess, but the fear is that it will translate into a new Albany backdoor-borrowing maneuver that offloads some of the new bridge’s cost on motorists and taxpayers throughout New York state.

The failure to adopt a new toll schedule has already caused a downgrade in the Thruway Authority’s bond rating, although Moody’s says it maintains a positive long-term outlook “based on our expectation that toll increases will be approved and implemented as needed.”

One risk is that further delays in establishing who pays what for the new bridge will only add to future expenses. A gradual approach, upping the toll a dollar or so over each of the next few years, would at least help dampen the sticker shock, pay some interest costs now and let the Thruway Authority put some cash aside for future debt payments.

For now, the authority is kicking the issue over to a “toll and finance task force.” Any bets on whether that group will issue detailed recommendations before Election Day?

To be sure, adopting a plan to raise tolls sooner rather than later won’t help Cuomo burnish his carefully crafted image as an effective manager who somehow delivers big projects at no cost to anyone. But it will fend off bigger debts down the road.

E.J. McMahon is president of the Empire Center for Public Policy. Nicole Gelinas is a senior fellow at the Manhattan Institute.

How a Blast From the Past Could Save NYC Again