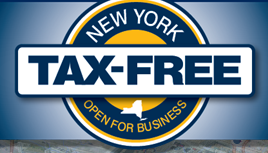 It’s “big”!  It’s “bold”!  It “could really make a difference“!  It’s Governor Andrew Cuomo’s Tax-Free NY proposal, subject of some of the biggest, boldest gubernatorial rhetoric since … well, since Cuomo’s launch two weeks ago of round three of the state Regional Economic Development Councils, which in turn came on the heels of a resort gaming destination plan in early May, neither of which should be confused with the “new day” proclaimed by the governor at last year’s yogurt summit.

The governor’s latest initiative would allow qualified start-ups, out-of-state firms or expansions of existing New York companies to operate on a completely tax-exempt basis for up to 10 years if they locate in designated zones at colleges, universities and “strategically located state-owned” property.  The focus has been on the 64 State University campuses, most of which are upstate, although the governor also says zones will be designated at private campuses.

News accounts say the governor has compared the initiative to the construction of the Erie Canal.

Well, let’s see. The Erie Canal, constructed by the state between 1817 and 1825, stretched 363 miles from Albany to Buffalo, opening the Atlantic seaboard to the new nation’s western interior.

Cuomo’s proposed Tax Free Zones at SUNY campuses will cover 120 million square feet — which, the governor points out, is more than the commercial space of San Francisco and Philadelphia combined.

But here’s another way to look at it: 120 million square feet equates to a total of 4.3 square miles, or about one-fifth the area of the city of Albany. To put that in further perspective, New York State as a whole covers 47,000 square miles of land, about 90 percent of which is upstate (i.e., north of Dutchess and Orange counties).

As first noted here last week, the one promising new wrinkle of Tax-Free NY is the focus on providing broad-based relief (in this case, the maximum possible relief) from all taxes.  The downside, of course, is that the tax break will be available on a very exclusive basis.

Indeed, by offering “tax-free” status solely to new enterprises willing to form partnerships with already tax-exempt government and private institutions operating on tax-exempt property, the governor can try to make a big splash while having zero direct impact whatsoever on the state budget.  The notion is fraught with potential bureaucratic and legal snags.  Nonetheless, if the Tax-Free NY hype motivates state lawmakers to start thinking seriously about broad-based tax reform and reduction benefitting all businesses, new and existing, that would be a good thing.

Unfortunately, Cuomo and the Legislature just got finished enacting a state budget that includes a net $5 billion in tax hike extenders, fees and other revenue-raising provisions over the next four years.