How would a proposed $15-per-hour statewide minimum wage compare to current pay ranges and historical precedents in New York?

One useful standard of comparison is the federal government’s estimate of the median wage for all jobs. The median is the midway point on the pay scale, with half of jobs paying more and half paying less. The chart below shows how the medians for different New York regions line up against the current statewide minimum of $8.75 as well as Governor Andrew Cuomo’s proposed $15 minimum, which would be phased in by 2021 for areas outside New York City. 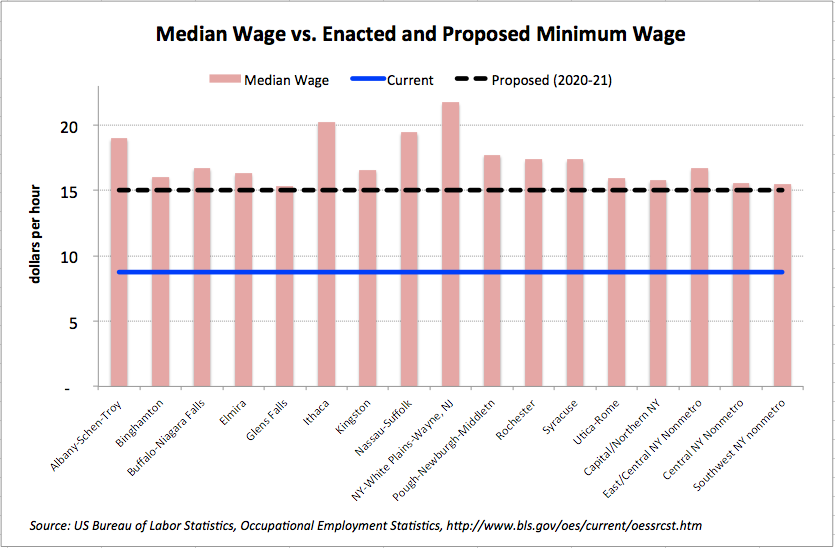 What would Mario do?

Governor Cuomo has evoked the memory of his late father in support of what he is now calling the “Mario Cuomo Campaign for Economic Justice.” As governor, Mario Cuomo proposed a minimum wage increase at least once, seeking to increase the level from $3.35 to $3.75. That increase, which failed to pass the Legislature, would have represented a modest bump of 12 percent compared to the 67 percent boost proposed by his son (comparing $15 to the $9 scheduled to take effect in 2016).

To be sure, it would seem safe to assume that, if Mario Cuomo were still alive, he would support the policy advocated by his son. Nonetheless, the historical record shows he never came close to advocating the same thing while he was governor.