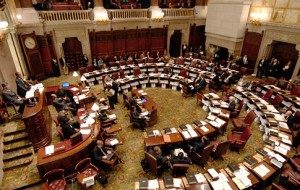 In a Newsday story Thursday morning about the political fight over single-payer health care, a spokesman for Democrats in the state Senate made a noteworthy promise: “The Senate Democratic majority will not raise taxes.”

If so, then single payer is dead in Albany. Without massive tax hikes, there’s simply no way to finance a state-operated health plan that covers 20 million New Yorkers.

The seemingly definitive statement by spokesman Mike Murphy comes as a surprise, because the single-payer health bill pending in the Legislature, known as the New York Health Act, is cosponsored by all 31 sitting Democrats in the Senate—the people for whom Murphy ostensibly speaks. Many of those legislators are currently campaigning on promises to support the bill if elected.

That legislation, which has already passed the Assembly four years in a row, includes two new levies: a payroll tax (with an 80-20 split between employers and employees) and a new tax on non-payroll income, such as investment returns. The bill does not specify rates or brackets, leaving those all-important details to be determined later, but there’s no question the price tag would be high.

A study by the RAND Corp., for example, estimated that Albany would need a $139 billion tax hike to finance the first year of single payer, which equates to a 156 percent increase in total state revenues.

A no-new-taxes pledge would also seem to throw in doubt a number of other progressive priorities in Albany, such as pouring billions more into public schools and the New York City transit system—which by themselves would likely require either new revenues or deep cuts to other programs in the state budget.

Murphy made his comment in response to a campaign broadside from the Senate GOP, which charged that the Democrats’ single-payer plan would lead to income tax hikes averaging $20,445 in Nassau County and $14,616 in Suffolk County.

The Republicans’ analysis fudged the facts somewhat: It assumed that the health plan would be financed entirely by income taxes, as opposed to the payroll and non-payroll taxes specified by the New York Health Act.

It’s also true—as single-payer proponents point out—that the cost of new taxes would be offset by the elimination of premiums, possibly resulting in a net savings for some individuals and businesses. This largely depends on the new taxes having a steeply progressive structure that dramatically increases costs for wealthier taxpayers—which, as an author of the RAND study warned, could trigger a “collapse” of the state’s tax base.

All of that said, the GOP’s basic point—that taxes would “skyrocket” if single-payer were enacted—is indisputable, a feature of single payer likely to make it unpopular with swing-district voters on Long Island and elsewhere.

In the heat of close-fought elections that could put them in the majority for the first time in 10 years, Democrats have been sending mixed signals. In a radio interview this week, Sen. Mike Gianaris of Queens, who chairs the Senate Democrats’ campaign committee, omitted single payer from his priority list for 2019. Yet he remains a cosponsor of the New York Health Act, and many of his rank-and-file members continue touting their support for the bill on their campaign websites.

State lawmakers cannot have it both ways: Either they oppose the New York Health Act or they support one of the biggest tax hikes in the history of this state or any other.

Was Murphy’s comment a case of campaign spin, or have Senate Democrats woken to the reality that the New York Health Act is prohibitively expensive? It’s a question worth getting an answer to before Election Day.

A rush to regulate PBMs