By midnight on April 15, more than 8.5 million personal income tax returns for 2013 will have been filed with the New York State Department of Taxation and Finance. Roughly one-third of those filers will owe nothing, and big chunk of total PIT receipts will come from a tiny fraction of high-income taxpayers. 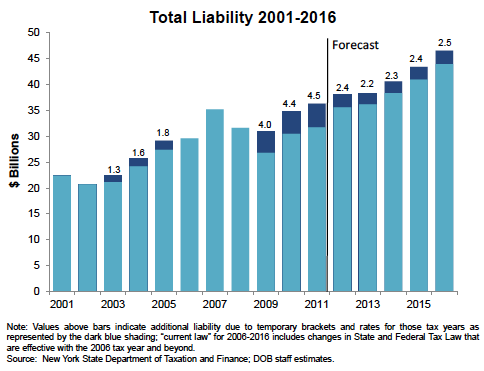 The Executive Budget shows that the share paid by the top 1 percent includes about $3.2 billion in added taxes raised by the temporary “millionaire tax,” now due to expire in 2018, which raises the top rate to 8.82 percent from 6.85 percent on single filers earning more than $1 million and married-joint filers earning more than $2 million. Even without that tax hike, the top 1 percent would be paying 36 percent of all income taxes in 2013. The same temporary law temporarily cut rates on filers earning less than $150,000, which reduced revenues by about $700 million. (See this article for more on the history of changes to the PIT since the 1970s.)

Based on data from prior years, some other income tax tidbits:

The PIT is by far the largest revenue source in the New York State budget, accounting for 62 percent of net state tax receipts as of fiscal 2013-14. This represents a significant increase over the level of 35 years ago, when the PIT made up 47 percent of tax receipts–even though the top rate back then was nearly twice as high. Adjusting for inflation, base law PIT receipts (not including the temporary provisions) have risen by 27 percent in the past 20 years. Thanks to tax cuts enacted under former Governor George Pataki, which targeted benefits mainly to low- and middle-income households, nearly all of the real increase in PIT revenues over the past two decades has come from high-income households. (Details on historic tax collections here.)

The chart below, also from the budget, shows the recent and projected income tax collection trends. Note that DOB expects significant growth in this tax source from 204 through 2016.