Amid speculation that passage of a property tax cap covering most of New York State will hinge on the fate of New York City’s rent regulations, Mayor Michael Bloomberg has shot down a proposal to cap taxes on some city apartment buildings.  He claimed, among other things, that the city’s property taxes are “low compared to the rest of the state.”  But this is true only of owner-occupied single- and two-family homes. The city’s taxes on apartments are actually quite high by any standard.

First, some background. As reported recently in the New York Post:

Developers are warning that as many as 10,000 “affordable” apartments in the 421-a tax-abatement program might be lost over the next few years because owners can’t afford to pay property taxes that, in some cases, have reached a third or more of their gross income.

The Real Estate Board of New York, which represents the city’s largest developers, has asked the administration to consider a tax cap of 20 percent.

“Our property taxes in New York City happen to be very low compared to the rest of the state,” said the mayor.

He rejected threats that landlords will turn thousands of “affordable” apartments into market-rate units if their tax breaks are not extended.

But the bottom line is we have a deficit and I think it’s hard to see how you could provide the services if we had to lower taxes,” Bloomberg said.

New York City’s property taxes on owner-occupied single- and two-family homes are low — only because the city’s arcane property classification system is designed to shift most of the burden to multi-family rental housing, along with commercial, industrial and utility properties.  Consider this sample of tax burdens on apartment buildings in some of America’s largest cities: 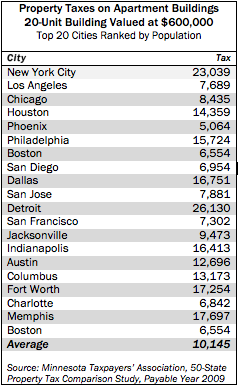 As for comparisons within New York State, the same survey estimates that New York City’s tax burden on apartment buildings is essentially equal to Buffalo’s, and about 12 percent higher than the property taxes in a sample rural area of western New York.

Governor Cuomo’s proposed 2 percent cap on property tax levy increases would not apply to New York City, or to school districts within the state’s other top 5 cities–Buffalo, Rochester, Syracuse and Yonkers.

“the cost of the average city worker is way too high”

How not to fix pensions