In the emerging nationwide economic and financial crisis, New York is going to run out of cash more rapidly than most states—and Governor Cuomo can’t say he wasn’t warned of Albany’s extreme vulnerability on this front.

While Cuomo said today that “it’s not just this state but every state” that will encounter budget trouble, New York’s cash balances are exceptionally low—ranking us 39th out of 50 states as a share of total general fund spending, well below medians, according to this recent Pew Charitable Trusts report.

This is an installment in a special series of #NYCoronavirus Chronicles by Empire Center analysts, focused on New York’s state and local policy response to the Coronavirus pandemic.

In fact, state Comptroller Thomas DiNapoli has been saying for years that Cuomo and the Legislature weren’t doing enough to build up the state’s reserves. As DiNapoli put it in this report last December:

The simple truth, however, is that New York is not adequately prepared today …

The concept of New York’s rainy day reserves goes back to the Great Depression. The need for such safeguards is especially great today given our experience with volatile revenues in recent years, the challenges of an increasingly globalized economy, heightened climate-related threats to infrastructure, and potential cuts to federal aid, which accounts for more than a third of the State budget. The time to prepare for serious problems is before they arrive. [emphasis added]

To be sure, no one could have anticipated the swiftness with which the coronavirus pandemic arrived, wreaking havoc in the financial markets, forcing draconian business shutdowns and job losses, and hammering state revenues into the ground. But at some time or another, as America moved deeper into the longest economic expansion and Wall Street bull market on record, a recession was inevitable.

DiNapoli estimated this week that tax collections in the coming year could be as much as $7 billion below original projections, and Cuomo’s budget director now says $7 billion is at the “low end” of the likely impact.

The federal government has just created a new cash flow problem by extending the tax filing deadline from April 15 to July 15, which will probably force the state to issue several billion dollars in short-term notes to cover expenditures in the meantime, which include a very large 2019-20 school aid “tail” payment in June.

Breaking down the cushion

The state’s total available cash reserves are in two categories: the statutorily restricted Rainy-Day Reserve and Tax Stabilization Reserve Fund (generally lumped together under the “rainy day” heading), and unrestricted cash remaining from an unusual windfall totaling more than $12 billion in civil penalty settlements by financial institutions since 2014. By law, the restricted funds must be fully replenished when conditions recover. The unrestricted reserves can be spent like a one-shot revenue, with no requirement for replenishment.

Cuomo through 2019 nearly doubled the restricted rainy-day reserve from its depleted post-recession level he inherited, but New York did much less than other states on this front, as illustrated in this chart from DiNapoli’s report. 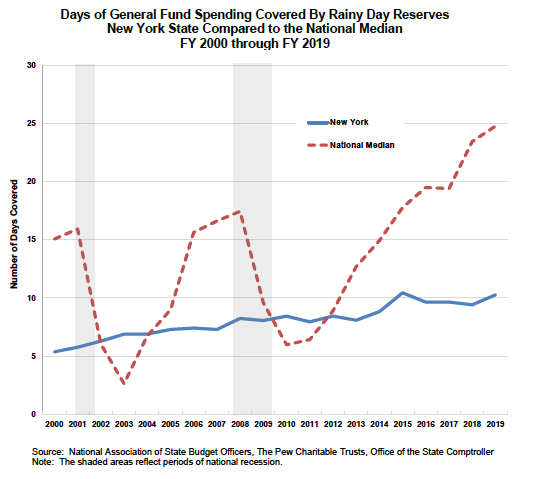 Including both the restricted rainy-day reserves and the unrestricted funds, New York as of the end of FY 2019 had enough in its total balances to run state government for 36.1 days, nearly two weeks short of the 50-state median, as illustrated below. 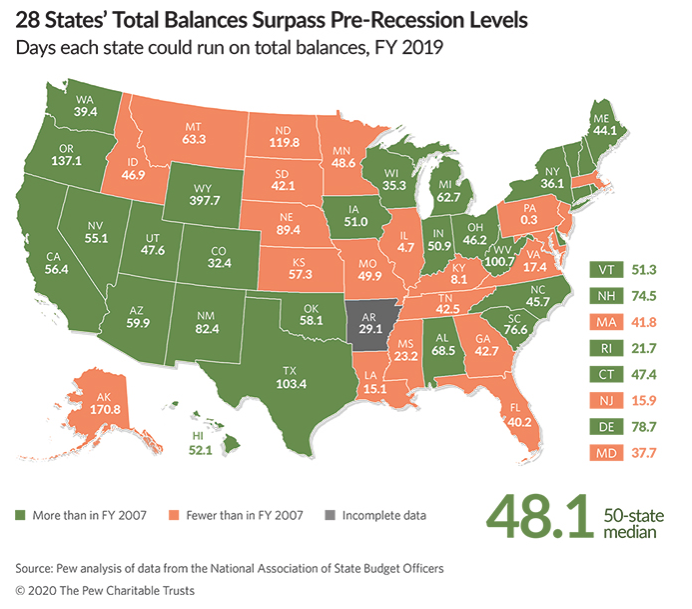 The total cash balance used in the Pew comparison has shrunk since 2019, from $7.2 billion to a projected $6.5 billion in the soon-to-end 2020 fiscal year, as shown in this table from Cuomo’s January financial plan: 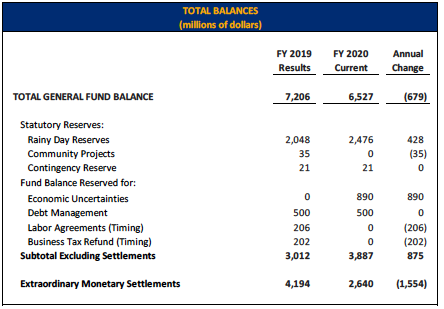 It’s not DiNapoli’s style, but as the state cash crunch intensifies in the next few weeks, the comptroller will be entitled to say “I told you so.”

The most comparable major state on the list would California, the only other state that is even more dependent than New York on personal income taxes paid by its highest-earning 1 percent of residents. California had balances of 15 percent—equivalent to an added $3.5 billion in New York’s accounts, and enough to pay the Golden State’s average costs for 56 days. California’s larger reserves are a legacy of former Governor Jerry Brown, who sounded a lot like DiNapoli before leaving office at the end of 2018.

At the opposite extreme, neighboring Pennsylvania ranked dead last with microscopic balances totaling 0.1 percent as of 2019—and New Jersey wasn’t much better at 4.3 percent (ranking 46th).