With spring training around the corner, let’s compare village dissolution to baseball.Since 1921, 47 village governments have dissolved, but there has been a rise in the number that have tried in recent years—with limited success, a report today found. 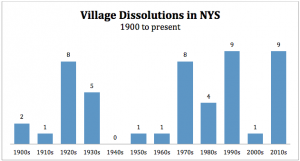 Ten of the dissolution votes have occurred in the past five years, a 30 percent approval rate on the 33 dissolution public votes since 2008, the report by the Empire Center for Public Policy in Albany; the Center for Governmental Research in Rochester; and GovWorks Consulting in Princeton, NJ

The largest to dissolve was Seneca Falls, which dissolved into the town of Seneca Falls in 2012.

The report looks at ways governments can either consolidate or share services to cut costs.

“As economic and fiscal conditions have tightened in recent years, local governments statewide have increasingly explored consolidation and service reengineering as pathways to a stronger bottom line,” the report said.

Gov. Andrew Cuomo when he was attorney general pushed the Legislature to approve a law that made a dissolution easier.

The good, the bad and the ugly in Cuomo’s budget

Medicaid cuts make the state budget, with some tweaks

EDITORIAL: CAN WE AFFORD SIX -FIGURE PENSION AS THE NORM?

After Hospitals’ Donation to New York Democrats, a $140 Million Payout