While New York’s economy continued to ever-so-slowly recover in June, the Empire State’s year-to-year percentage decline in private employment since the pandemic lockdown remained the worst in the continental U.S., according to the latest payroll establishment data from federal and state agencies.

On a non-seasonally adjusted basis, the data show New York’s private-sector payroll count for June totaled just under 7 million jobs, down 1.4 million from the same month in 2019, the state’s monthly jobs report showed. This marked an improvement over the May year-to-year loss of about 1.7 million jobs, or -20 percent, reflecting the continued slow reopening and resumption of business activity on a regional basis. The year-to-year job loss was most severe in April, the first full month subject to Governor Cuomo’s New York State on PAUSE order, when private-sector employment was down more 1.8 million, or 22 percent, from the previous year.

However, the June estimate for New York still equated to a private employment decline of 16.8 percent from a year earlier—well above the national average drop of 9.2 percent, indicating New York’s economy was bouncing back more slowly than the nation’s. As shown below, New York’s fall in private employment was the highest of the lower 48 states. Only Hawaii, with a 17.6 percent decline compared to June last year, had a bigger rate of job losses during this period, as shown below. 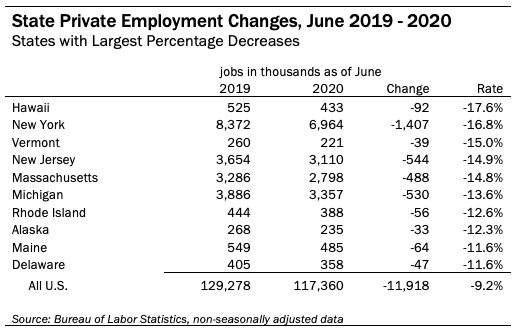 On a seasonally adjusted basis, the private-sector job count for June represented a 4.5 percent rebound over May. If growth continues at that rate, employment will recover to pre-coronavirus level by the end of the year. More likely, however, the rate of rehiring during the first reopening phases following the lockdown will not be sustained at a steady rate.

This chart from the state Labor Department illustrates how the job loss since March has been far worse than anything experienced in the three recessions since 1990. 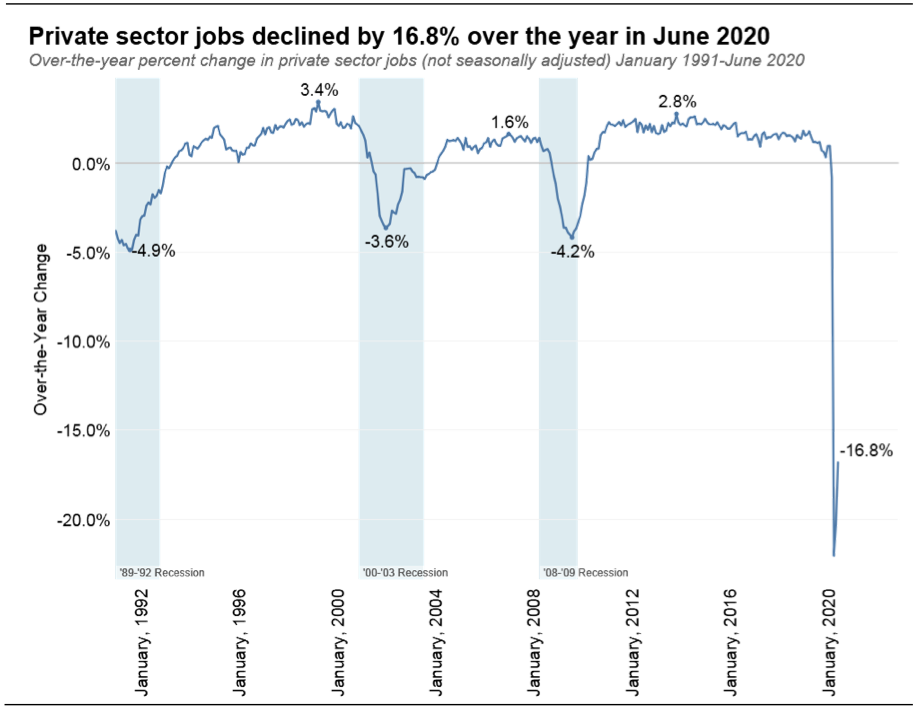 The regional pattern of job losses in New York remained unchanged, with more than two-thirds of the decline concentrated in New York City and its nearby suburbs that were the epicenter of the COVID-19 outbreak in March and April. In percentage terms, the biggest percentage drop in employment as of June was in the Glens Falls area, perhaps reflecting the loss of seasonal tourism jobs in Lake George and the southern Adirondacks. The lowest percentage decline was in Elmira, which economically has been the poorest-performing area of New York in recent years and was losing jobs even before the pandemic. 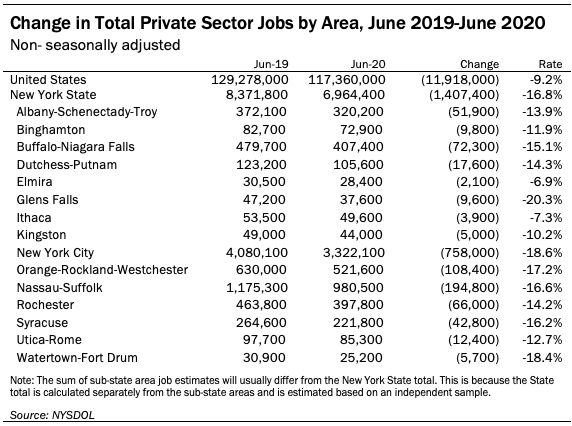 The continuing impact of the pandemic was also reflected in state tax data for June, as tax receipts were down $1.5 billion or 17.3 percent from the previous year, according to the monthly state cash report from State Comptroller Thomas P. DiNapoli. The comptroller’s summary noted that June tax receipts were $475 million below the latest projections of the governor’s Budget Division, with shortfalls in personal income, consumption and business taxes.

More significant tax receipt numbers won’t come out for another month, when the data will include the final settlement on state income tax filings that were delayed from April 15 to July 15.

New York’s statewide unemployment rate of 15.7 percent was the nation’s third-highest, including an eye-popping 20.4 percent in New York City and 12.2 percent outside the city.

On a seasonally adjusted basis, New York’s statewide jobless rate was 3.9 percentage points worse than May’s number, and well above the national rate of 11.1 percent. The only states with higher unemployment rates than New York were Massachusetts and New Jersey at 17.4 percent and 16.6 percent respectively. Among other neighboring states, Pennsylvania had a June unemployment rate of 13 percent, while Connecticut and Vermont were both below the national average at 9.8 percent and 9.4 percent, respectively.

Of all the economic data collected since the start of the pandemic, the most striking indicator of the economic impact remains the weekly count of initial unemployment claims since the middle of March. As of July 11, the total was up 2.8 million filings compared to the same period in 2019, as shown below.