New York’s private-sector job recovery accelerated in March—but remained far behind the national pace on a year-to-year basis, according to the latest monthly figures from the state Labor Department.

This analysis was updated April 16 with subsequently released data for all 50 states from the U.S. Department of Labor.

Compared to the same month in 2020, New York’s statewide private employment in March was down 823,100 jobs, or 10.1 percent. As illustrated below, this was an improvement over the nearly flat-lined pace of the recovery since last fall, which saw monthly year-to-year drops in the neighborhood of 1 million jobs. 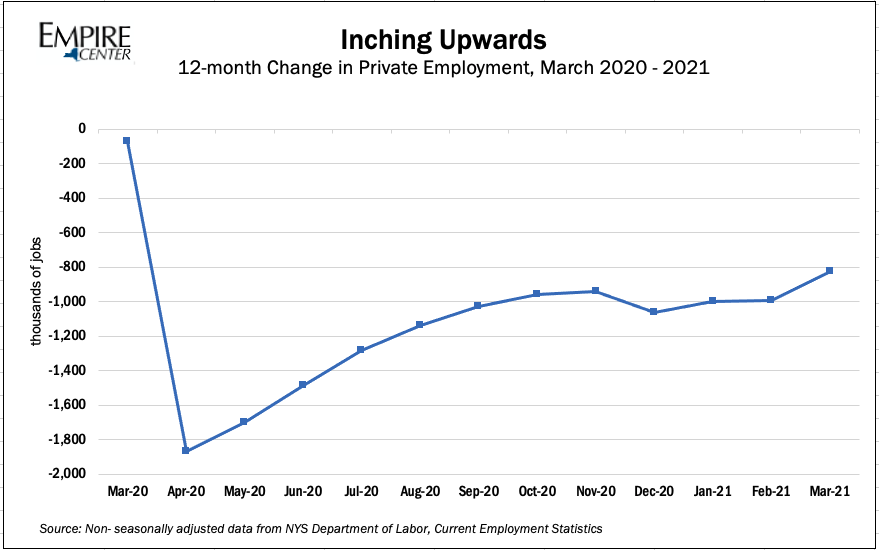 On the national level, the recovery is accelerating at a stronger pace. Private employment in March had crept back up to within 4.3 percent of the 2020 level, a nationwide net drop of 5.3 million jobs on a year-to-year basis. For most of the winter and autumn months, New York’s net percentage job decline was twice the U.S. level; as of March, it was nearly two-and-a-half times worse. As shown below, New York was tied with Nevada for the second-worst jobs recovery of any state after Hawaii.

But New York’s relative recovery rate looks stronger based on a seasonally adjusted basis, which reflects statistical adjustments reflecting assumed historical hiring patterns. On a seasonally adjusted basis, New York’s March statewide private employment total was up 61,000 jobs from the February level, an increase of 0.8 percent, while the nation gained jobs at only half the pace, or 0.4 percent, last month.

Next month’s payroll establishment job numbers for New York will be especially noteworthy, coming exactly a year after the worst month of the economic crash induced by the pandemic shutdown, when statewide private employment fell by nearly 1.9 million jobs below the level of a year earlier.

Where the jobs aren’t

New York City, epicenter of the pandemic starting a year ago, remains by far the Empire State’s weakest region in terms of private employment compared to a year ago, with jobs still down a net 13.2 percent. Gotham’s net decline of 532,500 jobs from the March 2020 level accounted for nearly two-thirds of the state’s total loss compared to a year earlier. Suburban Long Island and the lower Hudson Valley were down a net 8 percent and 7 percent, respectively, during the same period.

The strongest major metro areas upstate were Albany-Schenectady-Troy, down just 5.7 percent from a year earlier, and Rochester, down 5.8 percent. The weakest upstate area was Elmira, down 9.6 percent, suggesting that the long-term economic decline of the western tier has resumed after pausing during the pandemic. The next weakest area was the historically dynamic Ithaca area, where private jobs were down 9.5 percent on a year-to-year basis—no doubt reflecting the impact of the pandemic on the Cornell and Ithaca College resident student populations.

But as shown below, New York’s unemployment rate was the second highest of any state’s.