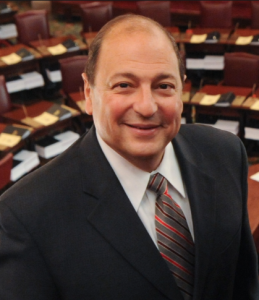 State Sen. Tom Libous of Binghamton, deputy leader of the Republican majority in the Legislature’s upper house, has been running a campaign commercial that takes credit for working with Governor Andrew Cuomo to enact, among other things, “the largest middle-class tax cut in 58 years.”

Libous cooperated with Cuomo, all right, but the senator’s characterization of the tax cut is simply not accurate. Last December’s tax package — which expires at the end of 2014 and which, on a net basis, raised income tax revenues by almost $1.9 billion — did not deliver the largest middle-class tax cut in 58, or 38, or 28, or even just eight years. By historical standards, the bill’s marginal rate cuts for lower brackets were not especially “large” at all. In percentage terms, they were among the smallest income tax cuts to have been enacted by New York since the state began a concerted effort to reduce marginal rates in the late 1970s.

Ironically, Libous (now in his 12th term) and other Republicans can claim much of the credit for what was truly New York’s largest middle-class income tax cut of the postwar era — George Pataki’s 1995 Income Tax Reduction Act.  Middle-class families saved an average of 25 percent under that law, which delivered even greater average savings to families in areas with lower average incomes, including the Southern Tier.  Pataki subsequently signed a series of other cuts benefitting the middle class, capped off by the enactment in 2006 of a state income tax credit of up to $330 per child.

By comparison, last December’s law temporarily reduced the permanent-law marginal tax rate by a maximum of 6 percent on taxable incomes below $300,000. Because the marginal rate applies only to taxable incomes above $40,000 for married couples, the net effect was a much smaller tax cut.  A median-income family in the heart of Libous’ district (i.e., a Broome County wife and husband with adjusted gross income of $61,000 and two small children under 17) will temporarily save a grand total of $16 a year, or one percent.

This is not the first time that Libous has exaggerated the impact of the Senate GOP’s tax deal with Cuomo. Asked in a TV news interview last December to describe how the agreement would affect the burden on residents of the Southern Tier, Libous said “what they’re telling us now [is] the average family will see a reduction of $300 to $400 a year.”  But that was true only for “average” families with incomes of $150,000 to $200,000. Indeed, the maximum cut of $600 will be pocketed by those earning taxable incomes of $300,000 – and even for them, the net tax savings will come to just 3 percent. Libous also said that those making more than a million dollars a year were “going to see a little bit of an increase,” which was an interesting way of describing a state income tax increase of 29 percent over permanent-law levels for the affected group.

The “largest middle-class tax cut” line in Libous’ commercial (a variation of which, “the largest middle class tax cut in decades,” was used in State Sen. Roy McDonald’s campaign commercials) is a distortion of the more carefully worded, oft-repeated claim by the Cuomo administration that last December’s tax package had yielded the “lowest tax rates for middle-class New Yorkers in nearly 60 years.” Very strictly speaking, this is accurate, since the marginal rate was last below the current permanent-law level of 6.85 percent in 1953. Given the significant differences between today’s state tax code and the income tax structure of the early 1950s, the comparison is also essentially meaningless, if not downright misleading.

If Libous wanted to tell his constituents what really happened in last December’s special session, here’s what he might say: “Governor Cuomo needed Republican votes to extend for three more years a big temporary tax increase on high-income New Yorkers, which he had previously promised not to do.  We agreed to go along with that proposal only after the governor agreed to make it temporary and threw in some token marginal rate cuts for people in lower income brackets, which was at least better than nothing. If you re-elect me, I’ll be around when the whole package expires in December 2014. What I’ll vote to do then is anybody’s guess.”