AFSCME, the nation’s biggest public-sector labor union, is mounting a statewide ad campaignclaiming that “politicians in Albany” want to “cut the pensions of firefighters, teachers and nurses by 40 percent.” 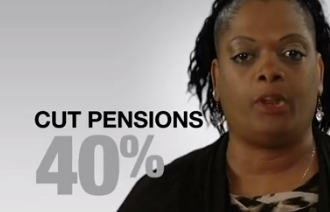 For general employees of state and local government, Governor Cuomo’s proposed Tier 6 plan features a primary pension “multiplier” factor that is 17 percent lower than the same factor in Tier 5 — with the result, for example, that the pension for 30 years of service will start out at 50 percent of final average salary instead of 60 percent, plus an annual cost-of-living adjustment thereafter.

So how do the unions come up with that 40 percent figure?  Simple: as explained here, they assert that a proposed increase in the retirement age, from 62 to 65, would be equivalent all by itself to a 20 percent reduction in the pension benefit.  ** UPDATE: See note at bottom of post.**

If you continue working for several more years, the salary you continue to collect (including, of course, any pay raises) will be larger than a Tier 5 pension would have been during those years, so the net result will be an increase in income, not a reduction.  But since some employees might prefer to trade the job income in order to retire sooner, AFCSME counts this as a big  “cut” for everyone.  The union also says that the Tier 6 provision eliminating use of overtime and sick leave accrual in the salary base calculation is equivalent to a 3 percent reduction compared to Tier 5 — even though this will affect new uniformed and hourly workers far more than general employees.

The commercial sound bite format clearly is meant to imply that pension benefit checks will be reduced 40 percent–which is untrue. Anyone not paying close attention–i.e., most normal New Yorkers–will also assume the governor is proposing a cut in pensions for current workers like the people in the commercials.  That’s also untrue.

Of course, the union couldn’t expect to generate much sympathy among New Yorkers with a commercial stating more accurately that “politicians in Albany want to make our future members work until they’re 65″– especially when workers born after 1959 aren’t eligible for Social Security until age 67.

Another inaccuracy in the ad: it starts with a guy who identifies himself as a “proud New York State police officer,” and implies throughout that cops and firefighters are in the same boat as everyone else.  That compounds the inaccuracy of the message. State troopers (average salary: $112,000) can now retire after 20 years, at any age, with a pension equivalent to half their final average salary including overtime. Under Tier 6, they would still be able to retire after 20 years at any age. Local police and firefighters would also remain in either 20- or 25-year retirement plans, typically making them eligible for retirement before age 50.

What bothers the troopers along with other cops and firefighters is the Tier 6 provision that would stop them from beefing up their final average pay with overtime and other extras. In 2011, in part as a result of overtime and extras, the average pension for all newly retired members of the New York State Police and Fire Retirement System (PFRS) was $68,162. For PFRS members in 20- and 25-year retirement plans, the average pensions were $53,478 and $69,499, respectively– this, remember, for men and women still in their 40s. Thirteen percent of new state and local government retirees outside New York City qualified for pensions of more than $100,000 last year, and most were PFRS members.  A safe generalization: the vast majority of cops and firefighters in New York can retire in middle-age with pension benefits exceeding the average private-sector wage in the regions where they live. On top of that, most also receive free or greatly discounted employer health insurance coverage for the rest of their lives, an increasingly unaffordable perk not touched by Tier 6.

It’s a safe bet you won’t be hearing those numbers in any AFCSME commercials.

UPDATE: On March 9, the Fiscal Policy Institute posted its own explanation of the 40 percent estimate, which can be downloaded here.