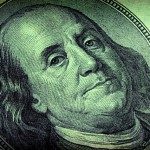 If we’ve heard it once, we’ve heard it 100 times: the average annual benefit paid by the state pension system in 2011 was $19,151 — “not a big amount for someone whose [sic] gave a lifetime of service,” as the Public Employees Federation (PEF) puts it in a letter and blast fax to state legislators.

But that commonly cited figure is very misleading. It includes payments to former employees who only minimally vested in a public pension plan–those who worked only part of their careers and those who worked only part-time — many of whom  last worked for the government decades ago. It also includes disability benefits and reduced payments to survivors of deceased retirees.

If New York’s newly retired state and local employees earned an average pension of just over $19,000 after a full career in government, Governor Cuomo’s Tier 6 pension reform proposal wouldn’t be a raging issue now, because pension costs (while still rising) wouldn’t be nearly as high. In reality, the average benefit for newly retired general government employees after a “lifetime of service” is considerably higher than $19,151 – more than two and half times as high, in fact.

What are annual average pension for latest crop of employees retiring after a full career in New York state or local government?  The answers for three categories of state and local employee are illustrated below. 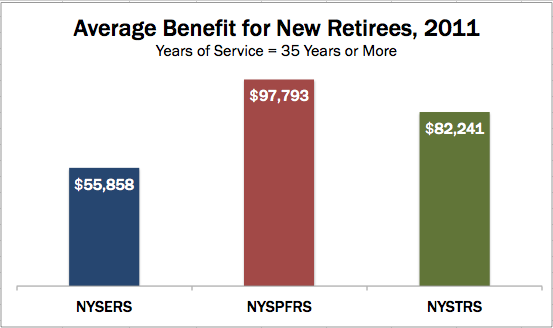 The ERS average is calculated from data presented in the following table from page 135 of the system’s 2011 Comprehensive Annual Financial Report (CAFR): 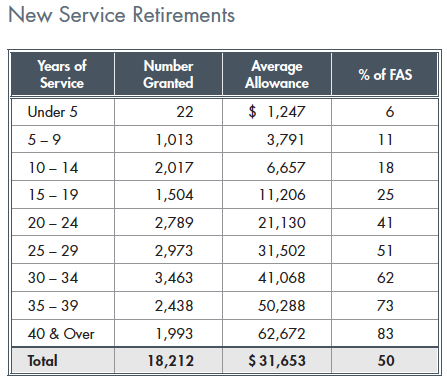 Note that the 4,431 retirees with 35 years or more of service–the “lifetime” cohort on which PEF’s rhetoric focuses, which is really the main focus of the reform debate—comprised 24 percent of the total. Another one-quarter of retirees had worked for less than 20 years, and thus had much lower pension allowances.  The middle 50 percent of retirees in 2011 worked for 20 to 34 years, and their pensions ranged from $21,130 to $41,064.  The average for all employees, including those working for much less than a full career, was $31,653 — which came to 50 percent of final average salary, guaranteed by the taxpayers and partially indexed to rise with inflation. When these employees reach 65 or 66, depending on their age, they will add full Social Security benefits to the mix.

The PFRS average in the chart is calculated from this table on page 136 of the CAFR: 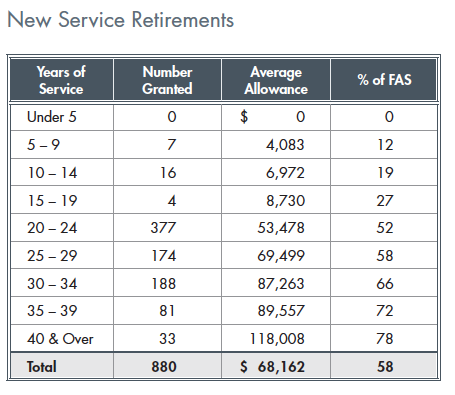 In the police and fire system, only 114 out of 880 new retirees in fiscal 2011 had more than 35 years of service; based on the data in the state report, their weighted average pension was $97,793. Nearly two thirds of retiring police officers and firefighters had less than 30 years, reflecting pension plans that allow retirement with full benefit after either 20 years or 25 years. Most police and firefighters, as shown above, averaged $53,478 and $69,499, respectively. The 30-34 year service category, which would include most ranking officers, averaged $87,263.  The average for all new police and fire retirees in 2011 was $68,162. 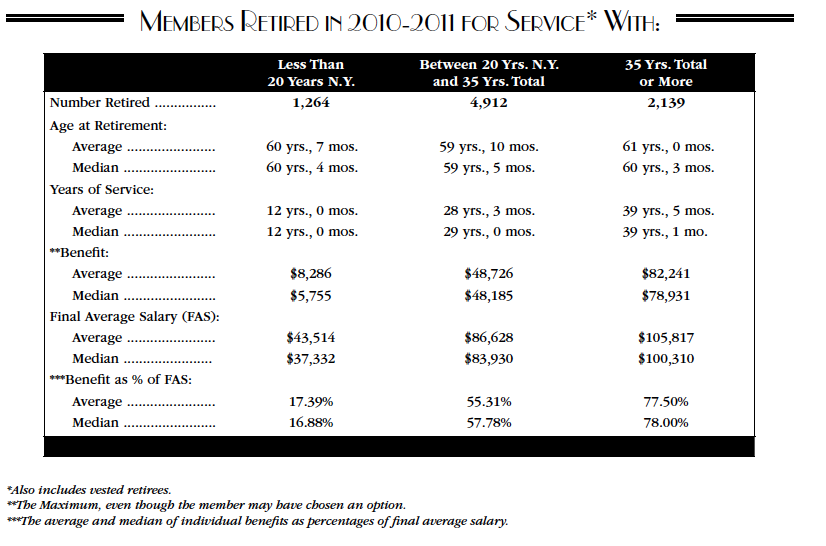 A separate table in the NYSTRS report shows that the 2,108 employees retiring in 2011 with 35 or more years of experience comprised 25 percent of all new retirees. Another 2,103 retirees had 30 to 34 years experience, and their annual pension averaged $60,204.

IMPORTANT NOTE: New state and local retirees in 2011 belonged to older pension tiers that, for non-police and fire employees, allowed earlier retirement ages (55 after 30 years of service) and lower employee contributions while working. Employees hired since Jan. 1, 2010, are members of Tier 5, which restored the original Tier 4 retirement age of 62. However, the Tier 5 annual benefit for full-career general employees is the same as the benefit available to Tier 3 and 4 employees (i.e., all those hired since July 1976):  60 percent of final average salary (FAS) after 30 years, 68 percent of FAS after 35 years and 77 75 percent of  FAS after 40 years, which is the second most generous maximum pension benefit offered in any state. Tier 5 also boosted employee contributions and capped the overtime available to newly hired police and firefighters, which will gradually reduce PFRS pension costs for members of that tier. However, it did not cap other extras such as accrued sick leave and shift differentials.

How about New York City employees?  Here are the average benefits for municipal workers who retired in fiscal 2007, as compiled by New York Leaders for Pension Reform: 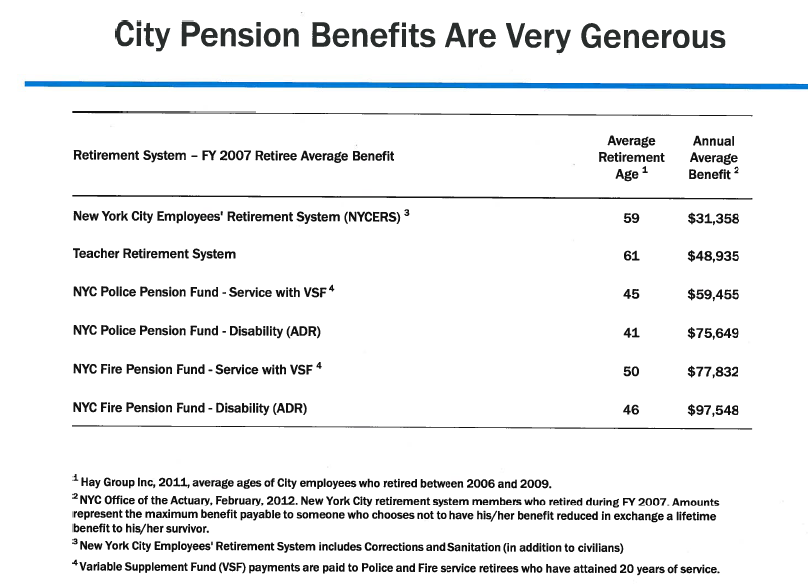