For many years, New York has been home to a disproportionately large share of America’s wealthiest households.[1] But the Empire State recently has fallen behind the national average when it comes to adding new income millionaires.

The total number of federal income tax filers with adjusted gross income (AGI) of at least $1 million increased by 29 percent, from 304,318 to 392,270, between 2011 and 2012, according to the latest data from the Internal Revenue Service (IRS). The growth rate was unusually high because many top-bracket taxpayers chose to accelerate as much income as possible into 2012 to minimize the impact of federal income tax hikes in 2013.

In New York, the number of taxpayers in the million-dollar-and-up bracket increased from 38,240 in 2011 to 43,820 in 2012. That was a growth rate of 14.6 percent—half the national average and 50th out of the 50 states. New York also added million-dollar earners at a slower-than-average rate between 2010 and 2011. In addition, since the recession, the state has trailed the national rate of increase in the number of taxpayers earning AGI of $200,000 or more.

These trends bear watching because they are indicators of overall economic growth and wealth creation—and because New York’s state budget is more dependent than ever on revenues generated by its highest-earning taxpayers.[2] 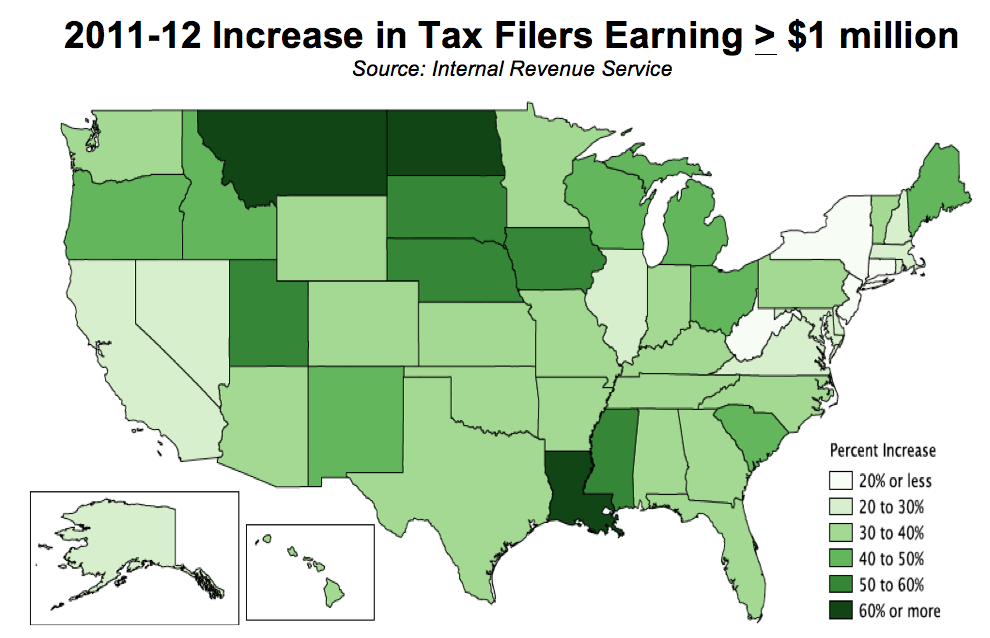 While $1 million is an arbitrary statistical threshold, it has more than symbolic importance for New York. The state currently imposes a 29 percent surcharge on all taxable incomes[3] starting at $1 million for individuals and $2 million for couples. The added state tax is due to expire at the end of 2017.

New York and nine other states accounted for roughly two-thirds of federal tax filers with incomes of $1 million or more as of 2011.[4] As shown below, four of these states – California, Florida, Pennsylvania and Texas – had above-average increases in million-dollar earners amid the unusual surge of tax returns in this category in 2012. 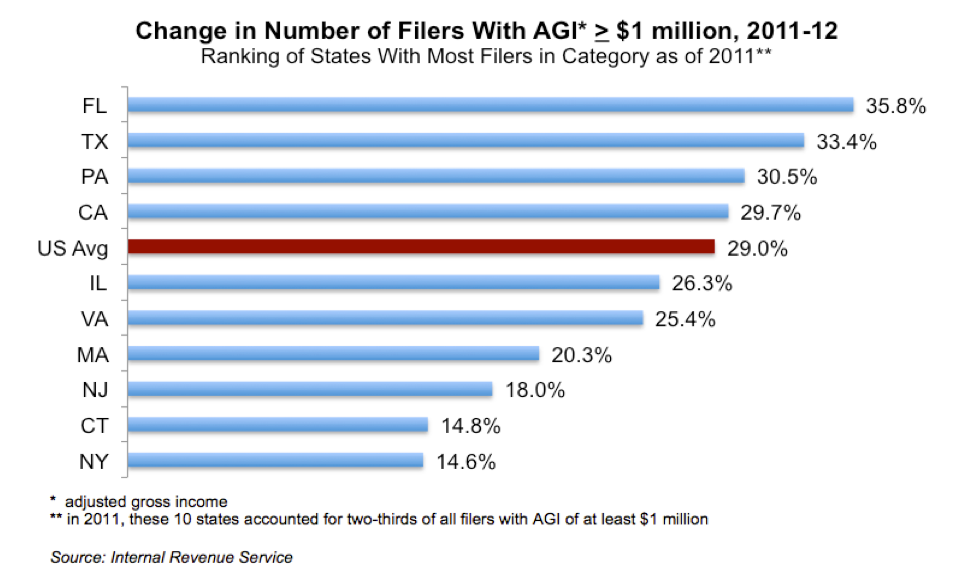 While New York had fewer new million-dollar earners in 2012, their average incomes remained considerably higher: $4.1 million per filer, compared to a $3.5 million average nationwide. In 2012, the total AGI of income millionaires increased by 29 percent in New York and 45 percent nationally.

Summary tables of high-income taxpayers and AGIs in each state over the past several years can be downloaded at www.empirecenter.org/publications/2012IRStaxfiles. The complete IRS files are at http://www.irs.gov/uac/SOI-Tax-Stats-Historic-Table-2.

[1] As of 2012, New York was home to 6.5 percent of all federal income tax filers and 11 percent of filers with incomes above $1 million, down from 12.6 percent in 2011. In 1997, earliest year for which data are readily available, New Yorkers were 11.9 percent of the nation’s income millionaires and 6.6 percent of all filers.

[2] In 2014, New York taxpayers with AGIs of at least $1 million will make up 0.9 percent of all state income tax filers while accounting for 41.3 percent of tax liability, according to the state Division of the Budget.