New York’s jobs report for August looked relatively strong—but only by comparison, that is, with what was generally regarded as a disappointing national number.

On a seasonally adjusted basis, New York gained 28,000 private-sector jobs last month—a growth rate of 0.4 percent, according to preliminary monthly estimates from the state Labor Department. This was double the 0.2 percent estimated growth for the U.S. as a whole, which was barely one-third of reported economists’ projections. However, New York’s performance was in line with its average monthly change this year.

As shown below, private employment in New York—which actually had begun to sag during the year leading up to the pandemic—still is trending far below the nation as a whole.

Comparing non-seasonally adjusted data for the month of August to the jobs count for August 2020, private employment in New York was up 384,000 jobs, or 5.4 percent on a statewide basis. This was only slightly better than the national year-over-year growth of 5.2 percent—but because New York’s job base was hit much harder to begin with by pandemic restrictions and lockdowns, it still has much more ground to make up.

The extent of the challenge can be measured by comparing jobs data for August 2021 to the same month in 2019, before the pandemic hit. The Empire State’s private-sector jobs count last month was still down 751,700, or 9 percent, from the August 2019 level. During the same period, the nation as a whole is down a net 3.5 million jobs, or just 2.7 percent. By this measure and others, New York has been the national epicenter of economic decline caused by COVID-19 restrictions: with just 6 percent of the nation’s total population and employment, the Empire State has accounted for more than one-fifth of private-sector job losses since the last pre-pandemic summer peak.

On a regional basis, 80 percent of the Empire State’s net private jobs loss since 2019 has been concentrated in the 12-county Metropolitan Commuter Transportation District: New York City, Long Island and the mid- to lower-Hudson Valley. Job loss rates generally were lower across upstate New York—but even the metro areas least affected by the pandemic recession have experienced employment losses exceeding the national rate. 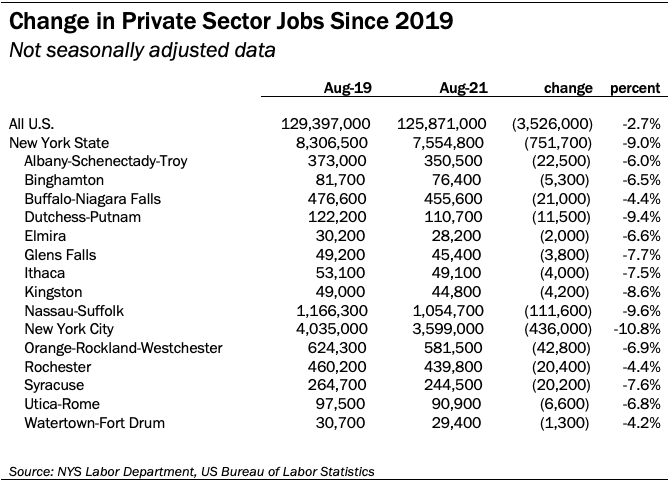 As shown below in the table captured from today’s Labor Department report, very strong growth in the Leisure and Hospitality sector—which was hit hardest by pandemic restrictions last year—accounted for nearly half the 384,300 private jobs added in the state in the latest 12-month period.  However, there also have been small but troubling dips in employment in the well-paying construction and finance sectors. 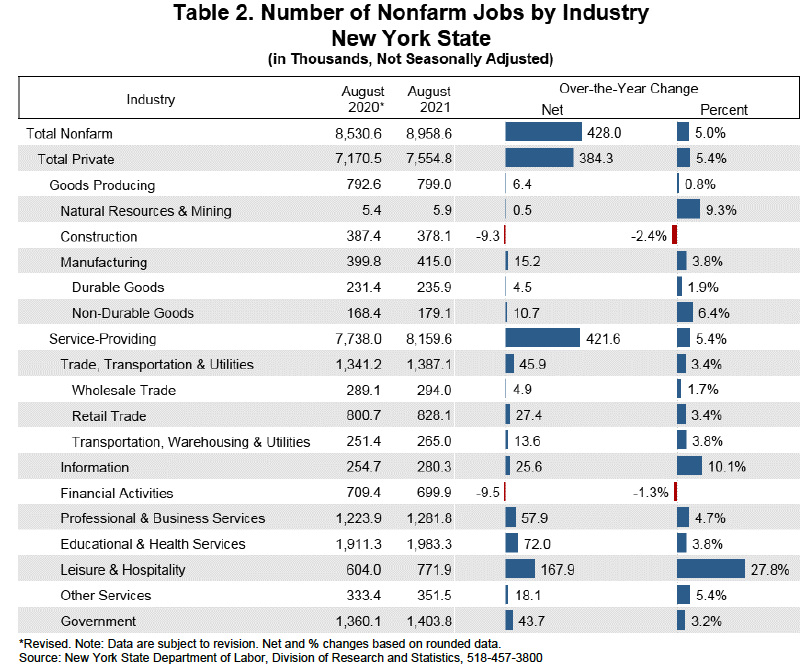 New York’s statewide unemployment rate was estimated at 7.4 percent, while the nation dropped to 5.4 percent. Both figures were down a barely significant two-tenths of a percentage point. The components of the unemployment statistic revealed another troubling trend: the number of New Yorkers in the labor force declined, as did the labor force participation rate. In two words: not good. 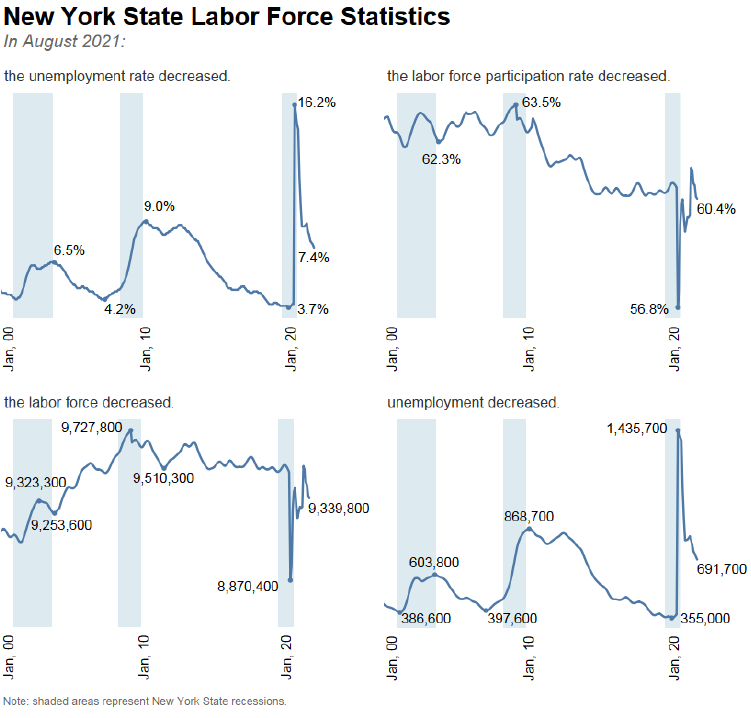 The eve of Labor Day (Sept. 5) saw the nationwide expiration of federally subsidized expanded unemployment benefit programs, including $300 weekly bonus checks and unemployment assistance to normally ineligible self-employed, gig workers and the long-term unemployed.  In normal times, at least, this would be expected to provide a strong nudge back into the job market for many who’ve stayed on the sidelines even as “Help Wanted” signs and labor shortages have proliferated across the state.

September, therefore, should be a crucial month for gauging the strength of New York’s recovery. If employment gains remain as weak as they have been relative to national trends, it could be a sign of deeper, persistent weakness in the state’s economy.