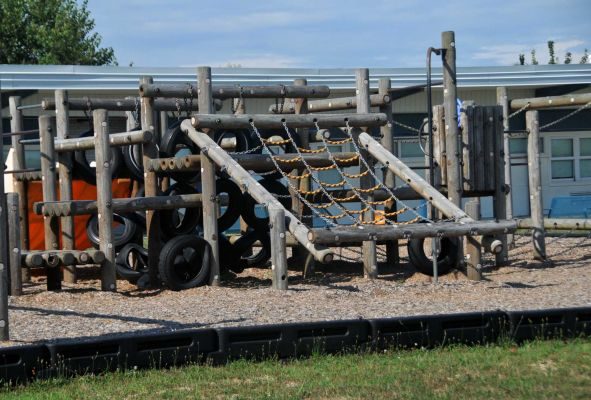 Photo credit: Danielle Finkelstein | One of two playgrounds on the school property at 2667 Bayview Ave. in Wantagh. (July 26, 2013)

The deal sheds light on a little-known, longtime practice of both Republican and Democratic legislators. They are using borrowed money to pay for small capital projects that benefit their own districts that is then repaid with interest by all county taxpayers. The money goes to school districts, fire districts and other entities that impose their own taxes.

The “community revitalization program” has continued despite county budget deficits that have led to layoffs, wage freezes and takeover of Nassau’s finances by a state control board.

Some of the 17 improvements to be paid for with the borrowed money are safety related: $75,000 for the purchase of three patrol cars for Freeport Village, in Minority Leader Kevan Abrahams’ district, $50,000 for a fire-rescue boat for the Village of Bayville in the district of Legis. Delia DeRiggi-Whitton (D-Glen Cove) and $40,000 in protective gear for the Wantagh Fire District, in Legis. David Denenberg’s district.

County taxpayers also will pay $60,000 to repair ballfields in the Bellmore school district, sponsored by Denenberg (D-Merrick); $40,000 to purchase an electronic sign for the Great Neck school district “to advertise school and public events,” in Democratic Legis. Judi Bosworth’s district; and $25,000 to restore a replica of a 16th century French sculpture called “Horses Restrained by Grooms” located at Roslyn High School in the district of Legis. Wayne Wink Jr. (D-Roslyn).

Altogether, the Democratic projects add up to $608,000, not including interest and other borrowing costs. Lawmakers had already approved more than $300,000 in borrowed money for improvements in Republican districts earlier this year. The remainder of the $6 million, part of County Executive Edward Mangano’s capital budget, will be spent on community revitalization projects, legislators said.

County lawmakers approve the capital projects through “inter-municipal” agreements with other taxing entities, which usually pay a portion of the costs.

Traditionally, the money has been divided between Republicans and Democrats based on their representation on the 19-member legislature — though some lawmakers propose many more projects than others. The projects are difficult to identify from legislative records. Lawmakers typically approve them in a unanimous bloc vote without discussion, and the agenda does not list the cost of the project and often doesn’t describe its purpose.

While Nassau lawmakers say the program provides important local assistance, critics call it another form of pork barrel spending, similar to state “member items” — grants made by state legislators to their districts’ community groups, which often return the favor by erecting signs thanking their benefactor.

“If they did it out of some slush fund of tax money, it would be difficult to defend. For them to be actually borrowing for it when you’ve got a county already in debt for bad reasons . . . adds insult to injury,” McMahon said. “It’s pure politics.”

McMahon added, “You’re doing it for places whose homeowners and businesses are wealthy enough to fund it out of their own pockets. Why doesn’t the Levittown Fire District that imposes a [tax] levy buy its own bunker gear?”

Abrahams (D-Freeport) said the projects are “necessary spending” by the county to ensure safety, encourage growth and to support Nassau’s diverse communities.

“From our standpoint, they’re all economically driven,” he said. “I define pork where we’re spending money and it’s not needed. In our case . . . it’s needed.”

Frank Moroney, spokesman for the 10-member Republican legislative majority, said the program helps communities with specific projects that are subject to county audits. “It’s not as if they’re just giving a bunch of money to a bunch of not-for-profits and letting them spend it the way they want to spend it,” he said.

Abrahams said the county does not pay for programs, but for improvements with a useful life of at least five years.

Denenberg, who sponsored eight of the 17 projects approved last month, said, “We can partner . . . with any other government so long as it has a county purpose: public safety, public works, education, recreation.”

Abrahams said the nine Democratic legislators insisted their projects be included in last month’s borrowing deal after learning Republicans had depleted the program funds on projects in their districts. “They got theirs already,” Abrahams said. “We’re just playing catch-up here.”

Not a new development

Such projects have been around as long as the legislature, which replaced the board of supervisors in 1996. The projects began when lawmakers wanted to erect a sign congratulating a local championship high school team, Deputy County Executive Ed Ward recalled.

Initially, lawmakers recommended such capital projects to supplement then-County Executive Thomas Gulotta’s federally funded downtown revitalization program. When County Executive Thomas Suozzi took office after Gulotta in 2002, he allocated about $3 million of the county’s annual capital budget for the community revitalization program and allowed lawmakers to select their own projects.

Presiding Officer Peter Schmitt (R-Massapequa) stopped most projects last year, questioning why financially troubled Nassau should be paying for improvements for school districts and villages that could pay for the work with their own taxes, Ward said.

A review of legislative records for 2012 shows that lawmakers approved only one agreement before Schmitt died unexpectedly in October: $30,000 requested by Legis. Dennis Dunne (R-Levittown) to buy 26 portable radios for the Seaford Fire District. After his death, lawmakers approved five more projects in 2012, all in Republican districts. The price was $140,000, not including borrowing costs.

In comparison, during 2011 — an election year — lawmakers approved 43 projects costing about $1.5 million; 27 were in Republican districts and 16 in Democratic districts.

The good, the bad and the ugly in Cuomo’s budget

Medicaid cuts make the state budget, with some tweaks

EDITORIAL: CAN WE AFFORD SIX -FIGURE PENSION AS THE NORM?

Comptroller warns of financial distress at the MTA, and the MTA goes on a hiring spree