New York spends more per student on education than any state or country. According to the most recent national and international spending estimates, New York would retain that status even after cutting state funding to schools by 20 percent, as Governor Cuomo threatened to do last year.

New York’s acceleration in education spending over the previous two decades was reckless, and rendered unsustainable by the pandemic’s economic fallout in 2020. Regardless, Governor Cuomo is forging ahead with a budget that will only exacerbate the problem. 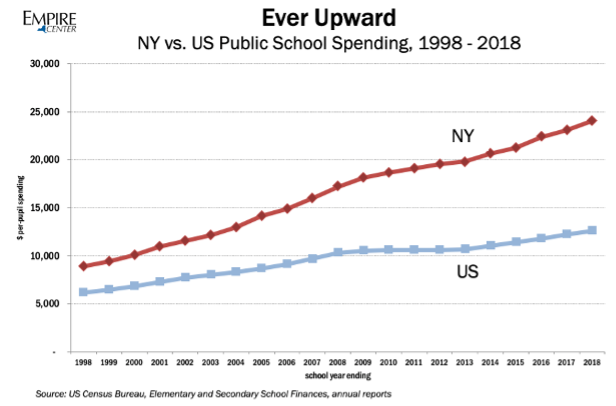 The executive budget decreases the state’s school aid contribution in fiscal year 2022. However, the state’s contributions are projected to increase the following three years. That follows a pattern of rapid acceleration: School aid increased by 41 percent between April 2011 and April 2019. In that same period, the consumer price index (CPI) increased 14 percent.

If the state’s school aid had grown at only the rate of inflation since Governor Cuomo’s first budget for FY 2012, New York would have spent $5.4 billion less on school aid in the current fiscal year.

In FY 2022, with a boost in funds from the federal government, total aid would increase more than seven percent. But the Governor’s multi-year financial plan projects deficits after the federal funds dry up. Instead, the budget should be balanced and provide certainty so districts can develop their own fiscally responsible multi-year plans.

The proposed total aid increase coincides with a projected decline in enrollment that exacerbates the existing downward trend. McKinsey & Company estimates that up to nine percent of high schoolers nationally could drop out due to pandemic and related school closures.i As of December 2020, enrollment in American K-12 public schools had fallen by 500,000, or two percent since December 2019. In all likelihood, per-pupil aid would increase if it simply kept pace with inflation. 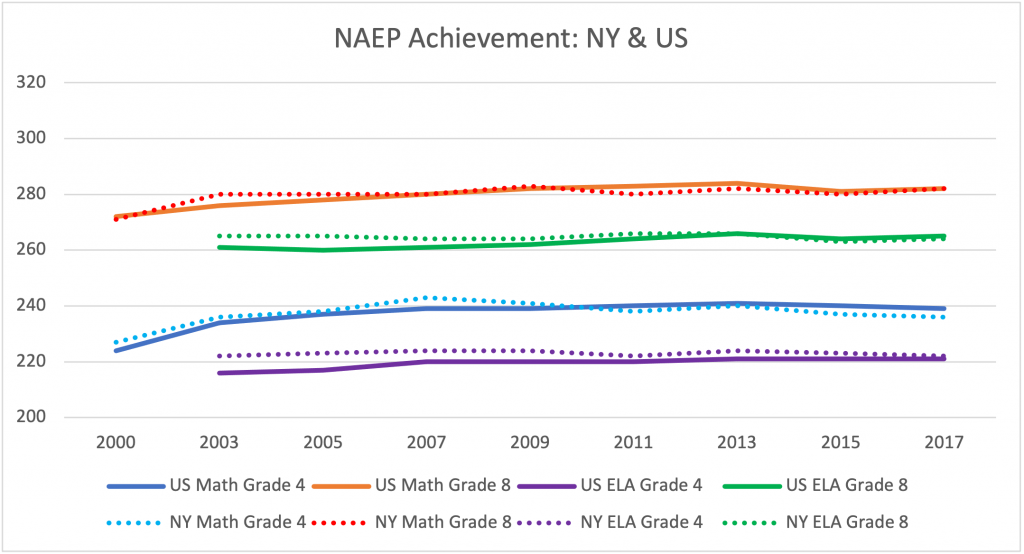 It is not clear how the aid increase would benefit public school students. Over the past 20 years, education spending and achievement have moved in opposite directions. In 1999-2000, New York spending was 42 percent higher than the national average and results on NAEP, commonly referred to as the Nation’s Report card, were slightly above average. In 2017-18, spending was 91% higher than the national average and NAEP results had declined to average or slightly below average.

Demands for more aid are rarely accompanied by explanations of why, after 20 years of not improving achievement, funding increases would now begin to benefit New York school children.

Just as the proposed budget reflects an unfounded belief that more money will solve New York’s subpar national performance in education, it also reflects a myth that gaps in achievement can be mitigated by “closing funding gaps between rich and poor schools,” as the governor framed it in his 2020 State of the State address. The two-decade trend in terms of spending and achievement cast serious doubt that closing the “funding gap” would reverse long-running achievement decreases.

The feasibility of closing “funding gaps” is as questionable as the logic undergirding it. Wealthy districts such as Jericho and Scarsdale feature per pupil expenditures nearly 300% higher than the national average. The revenue to support that funding is overwhelmingly local, accounting for about 90% of revenue in the wealthiest districts.

According to NAEP results, Massachusetts has the highest-performing public education system in the country.iv 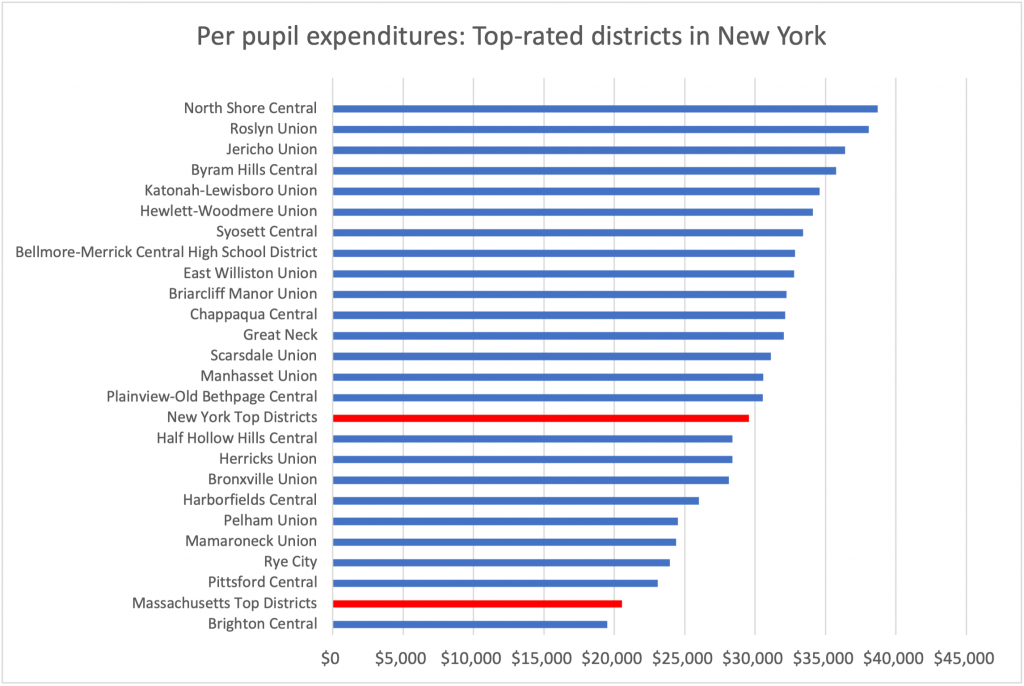 Consider: The Hopkinton School District, west of Boston, and the Syosset Central School District on Long Island are demographically and economically similar. In the 2016-17 school year, Hopkinton was the top-rated school in Massachusetts and spent $24,474 per student. Syosset was the seventh highest rated school district in New York and spent $33,417 per student. The contrast is striking.

Any earnest attempt toward fiscal responsibility requires slowing the growth of education spending. This task is best accomplished through keeping growth steady with inflation and dispersing aid in a way that is predictable for school and district leaders. The governor’s budget does neither.

New York has proven, year over year, that throwing more money into the school system won’t fix underlying performance issues or provide a better education. It’s time to try something new, for the sake of New Yorkers’ wallets and children.

iii Niche is a website that helps families appraise school quality. Fifty percent of the calculation is based on achievement factors such as assessment proficiency rates, SAT/ACT scores, and survey responses from students and parents. The other 50 percent measures a variety of factors including health and safety, diversity, and teacher quality.

iv New York districts would have spent $18.1 billion less during the 2017-18 school year if they had matched Massachusetts per-pupil funding levels.

v Calculated from data provided by the National Center for Education Statistics (NCES). The 2016-17 data is the most recent year for which NCES discloses district-level financial data.