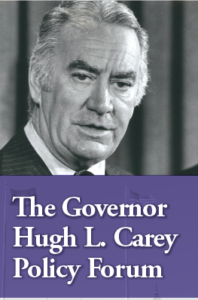 It has been 90 years since Governor Franklin D. Roosevelt presented New York’s first Executive Budget, and nearly 15 years since the governor’s control of appropriations language was clarified by the landmark Silver v Pataki decision. In recent years, however, the perceived gubernatorial domination of the budget process has revived old questions about the budgetary balance of power between the executive and the Legislature.

Is it time to consider potential changes to New York’s state budget-making rules? For its inaugural Governor Hugh L. Carey Policy Forum, the Empire Center posed that question to a panel of leading experts with hands-on experience in the budget process. A presentation by E.J. McMahon, research director of the Empire Center, based on his Issue Brief, was followed by a panel discussion featuring Richard Brodsky, former Assembly member; Peter Kiernan, former counsel to Governor David Paterson; and Robert Smith, former associated judge of the state Court of Appeals. The lively panel discussion was moderated by Liz Benjamin of the Spectrum News program, “Capital Tonight.”  Closing remarks were delivered by Sen. Liz Krueger, chair of the Senate Finance Committee.

Watch a video recording of the forum below.

The Impact of Welfare Reform in New York

Rightsizing New York’s Budget: Why and How It Can Be Done