After rising sharply once the economy began to reopen, New York’s jobs recovery ominously appeared to run out of steam in October, according to the state’s monthly jobs report.

The statewide private employment total for the month was estimated at 7.4 million— down 967,900 from a year earlier, the lowest October total since 2011. The Empire State’s 11.5 percent year-over-year decline in private employment reflected little improvement on the previous month’s drop of 12.1 percent.

Meanwhile, the statewide unemployment rate remained virtually unchanged at 9.6 percent in October, compared to 9.7 percent in September. There was a regional divergence in the trend: the jobless rate dropped from 13.9 percent to 13.2 percent in New York City, but rose in the rest of the state from 6.6 percent to 6.9 percent.

Putting on the brakes

In April, the first full month affected by Governor Cuomo’s New York State on PAUSE restrictions on normal economic activity, private payroll employment in the state collapsed to 1.8 million below the prior year’s level.

From May through July, the state regained 40 percent of that initial loss, or 628,000 jobs. Since July, however, the pace of the recovery has slowed down markedly. As illustrated below, the hoped-for V-shaped recovery never happened. 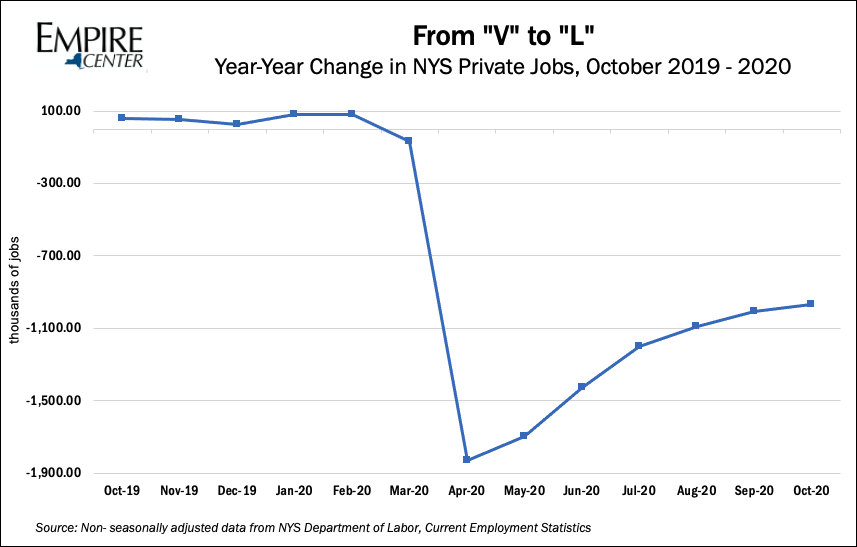 As illustrated below, New York’s job recovery is also sluggish by national standards—the slowest of any state other than Hawaii.

The October employment and unemployment figures are an especially troubling sign that New York’s economy remains shaky amid signals that the governor is ready to re-impose restrictions on business and social activities in response to a second-wave of COVID-19.