New York ranks 50th — meaning “worst” — in the Tax Foundation’s 2013 State Business Tax Index, released today.  The Empire State’s ranking tumbled back to last place after climbing all the way up to number 48 in the 2011 Index. 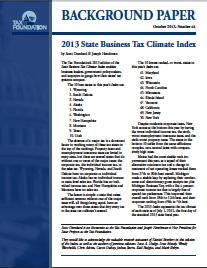 As in previous rankings by the Washington, D.C.-based group, the Tax Foundation says the biggest negative in New York’s climate for business is its personal income tax.  New York looks particularly burdensome in this category (2013 ranking: 50) because the index’s weighting of taxes include local income taxes, and New York City imposes the heaviest local income tax in the country.  And it will get worse, if the the city’s leading Democratic mayoral candidates have their way.

Deconstructing the other elements in the Tax Foundation index, New York’s corporate tax ranks a not-awful 23rd, while its sales taxes, while unemployment insurance taxes and property taxes rank 38, 45 and 45, respectively.

Meanwhile, Andrew Cuomo gets a “D” on the Cato Institute’s latest annual “Fiscal Report Card on America’s Governors,” also released today. The main reason for the low grade: the governor’s December 2011 temporary extension of the state “millionaire tax,” breaking a previous commitment to hold the line on taxes.