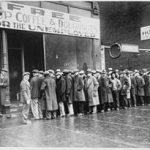 The outlook for New York’s economy shapes up as the grimmest on record, according to the latest employment statistics, economic surveys and forecasts.

Another 395,949 New Yorkers applied for unemployment benefits last week, adding to 1.1 million unemployed in the state as of April 4.

** UPDATE: In March, the number of private-sector payroll jobs in the state dropped 42,900 from the previous month, or 0.5 percent, the biggest such decline since April 2009, according to preliminary state Labor Department data released this afternoon.

Meanwhile, on a misleadingly positive note, the effects of the social distancing and lockdown measures imposed during the second half of March had little impact on total tax receipts last month, according to a cash report issued by state Comptroller Thomas DiNapoli’s office yesterday. Sales tax receipts were $134 million (9 percent) below projections, but personal income taxes actually came in $220 million (5 percent) above the budget forecast—an indication, more than anything, that Governor Cuomo’s cash plan was conservative.

Compared to what lies ahead, however, those March tax numbers are the last glimpse of a vanished world.

Indicators of regional business activity plunged to historic lows in early April, as efforts to slow the spread of the coronavirus kept many people at home and shut down large parts of the regional economy, according to the Federal Reserve Bank of New York’s two business surveys. The headline index for both surveys plummeted to nearly -80, well below any historical precedent including the depths of the Great Recession. About 60 percent of service firms and more than half of manufacturers reported at least a partial shutdown of their operations thus far. Layoffs were widespread, with half of all businesses surveyed reporting lower employment levels in early April. [emphasis added]

Respondents to the Fed’s general Business Leaders Survey said they had cut employment by 21 percent and staff hours by 15 percent. Manufacturers reported smaller payroll cuts averaging 11 percent, with an average 14 percent reduction in work hours. No surprise there: manufacturers were somewhat less affected than service firms by the government-ordered lockdown of public places, and demand for certain types of products has persisted.

A Siena College Research Institute survey of 307 upstate business CEOs—sponsored by The Business Council of New York State, and in part by The Greater Binghamton Chamber of Commerce, CenterStateCEO and The Buffalo Niagara Partnership—found nearly 90 percent of respondents were downgrading 2020 revenue and profit expectations, 40 percent had laid off workers, and 58 percent reported plans to cut back on equipment purchases.

New York City has been the leading source of new jobs for the entire state throughout the 10-year recovery from the Great Recession of 2008-09. However, the city’s Independent Budget Office (IBO) predicts Gotham “will shed roughly 475,000 jobs over the 12 months spanning the second quarter of calendar year 2020 through the first quarter of 2021.”

The IBO’s updated tax receipts forecast for New York City government also bodes ill for the state. The IBO projects that major city taxes will be down at least $2.9 billion (4.7 percent) in the current fiscal year, which ends June 30, and $6.7 billion (10.5 percent) in fiscal 2021, declining to $4.4 billion the following year assuming that that the economy begins a slow recovery in the second quarter of 2021.

City sales taxes alone will be down $1 billion and $3.1 billion lower in 2021, IBO predicts. Extrapolating from those numbers, the state’s revenue loss in fiscal 2021 will come to at least $3.5 billion—from New York City alone.

The IBO estimates for the city lend support to Governor Cuomo’s widely quoted estimate that state receipts will fall $10 billion to $15 billion below his original projections. In contrast to the state, the city government’s revenue base is anchored to the property tax, its largest revenue source, which will be relatively stable across the next few years, but the city also will be more negatively affected than any locality by cuts in state aid—which are absolutely inevitable.

So—we’re looking at the worst economic downturn since the 1930s. Private-sector employers are reducing staff. There are widespread reports of layoffs and furloughs across the private sector. Expectations are for greatly reduced expenditures investment and employment well into 2021.

All this will translate into severe deficits at both the state and local levels. The longer the pandemic lockdowns last, the deeper the hole will be, and the longer the recovery will take. Even if the “reopening” begins very soon, the climb out of the depths will be measured in years, not months. Local governments likewise will grapple with shortfalls on a scale they have never experienced, not even in the Great Recession.

Governor Cuomo’s response, so far, is a partial state worker pay freeze that he and his budget director have stressed is only temporary for now, linked to his demand for a $10 billion federal bailout that would, at best, be a stopgap even if he gets it.

At some point—presumably no later than early May, after the April “measurement period” created by the budget provision giving him extraordinary authority to cut and adjust spending—the governor needs to turn his attention away from daily public health briefings long enough to lay out a serious and credible plan for adjusting the state budget to new economic realities.