July’s private employment count in New York remained well below the pre-pandemic level, even as the national job count rose to a new high, according to monthly reports from the state Labor Department and federal Bureau of Labor Statistics.

On a seasonally adjusted basis, New York’s statewide private jobs estimate last month was back above 8 million for the first time in 28 months—but still 312,000 short of the February 2020 level. As shown below, New York has now regained more than 80 percent of the nearly 2 million private-sector jobs the state lost in the immediate aftermath of the March 2020 Covid-19 outbreak and lockdowns. However, even counting New York’s loss, employment in the U.S. as a whole has risen much further, to 471,000 jobs above the pre-pandemic total.

Still hovering nearly 4 percent below the February 2020 level, New York’s employment recovery remains among the slowest in the nation, as illustrated below. Only Hawaii (-8.7 percent), Vermont (-5.4 percent), and Alaska (-5 percent) had more ground to make up—even as 23 states had surpassed their pre-pandemic job counts. Employment in the nation as a whole was up a net 0.5 percent in July compared to February 2020.

Continuing a settled trend, post-pandemic job gains have been much stronger among the Empire State’s populous peers: Texas (+5.1 percent), Florida (+4.9 percent), and—despite its more stringent, New York-style lockdown and other public health restrictions—even California (+0.1 percent). Other than Vermont, three of New York’s neighboring northeastern states were also further on the road to recovery—and a fourth, New Jersey, had arrived at that destination, with a job count 0.5 percent above its pre-pandemic job level.

There was some modestly good news in the state’s latest monthly jobs report. On a seasonally adjusted basis, the July private sector total was 0.5 percent above the June estimate, slightly exceeding the national seasonally adjusted increase of 0.4 percent. New York also added jobs faster on a year-over-year basis—up 5.5 percent over July 2021, compared to 4.5 percent for the U.S. as a whole.

On a subs-state level, job growth remained concentrated in New York City, the epicenter of the COVID-19 outbreak in the spring of 2020, which was up 8.1 percent from a year ago. But job growth was below the national rate in all of the state’s other metro areas, as summarized in this table from the monthly state Labor Department report. 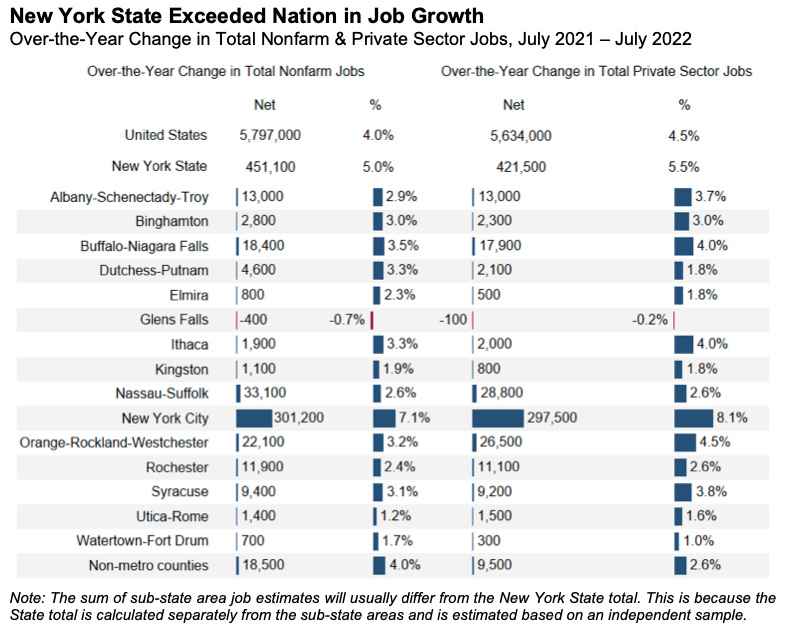 The non-seasonally adjusted statewide unemployment rate was pegged at 4.8 percent for July, down 2.3 percentage points from a year ago. This was faster than the national decline, but the statewide rate remained well above the national average of 3.8 percent.

Even as businesses and local governments across New York struggle to find applicants for job openings, unemployment exceeded the U.S. level in 13 upstate counties and all five boroughs of New York City, as shown below. 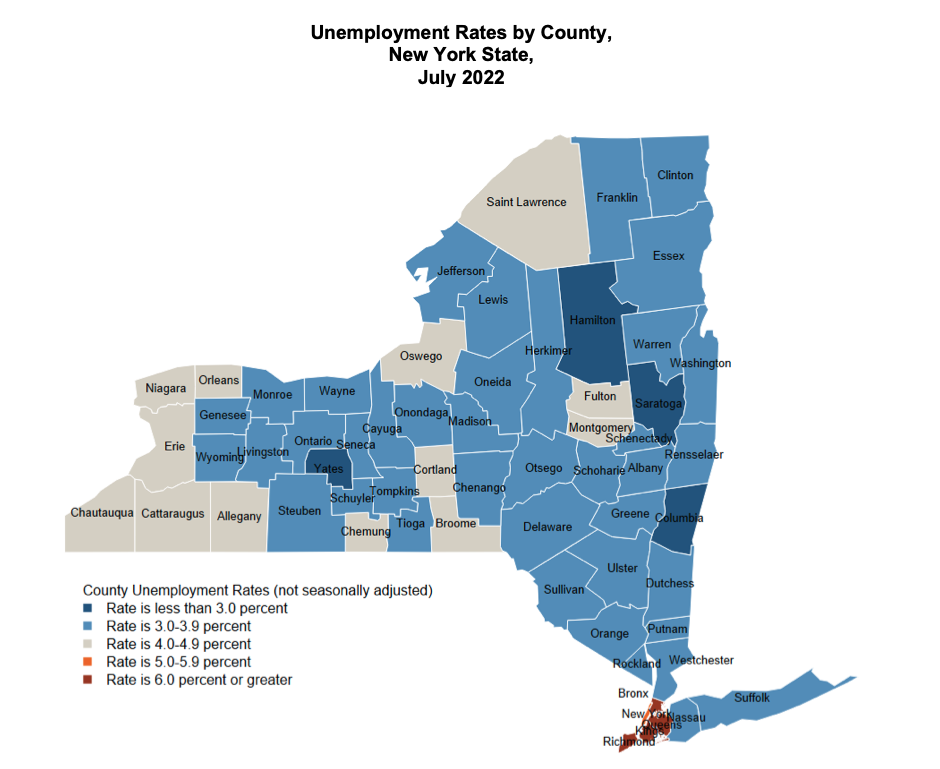 July’s job numbers are consistent with the lowered expectation in Governor Hochul’s First Quarter Update to the FY 2023 Financial Plan, which forecasts that total employment in New York won’t reach pre-pandemic levels until 2026 (assuming no recession in the meantime).