The combined state and local tax burden on New York residents in 2010, the year before Governor Andrew Cuomo took office, reached its highest level since 1994, the last year his father held the same office, as measured by data released today by the Tax Foundation in Washington, D.C. Relative to the national average, the tax burden on New Yorkers has grown since the start of the recession, according to the same Tax Foundation analysis.

After dipping to third place in 2008 and second in 2009, New Yorkers once again rank as the most heavily taxed people in the country as of 2010, the Tax Foundation said.  The combined per-capita state and local tax burden on New York residents was estimated by the foundation at 12.8 percent of per-capita income — up from 12.1 percent in 2009, and the highest level since Mario Cuomo’s last year as governor.  The New York tax burden was about 31 percent higher than the national average in 2010.

As shown below, starting in the earliest year for which the Tax Foundation has made these estimates, the New York tax burden has ranged from a high of 13.1 percent in 1977 to a low of 11.5 percent in 2001. 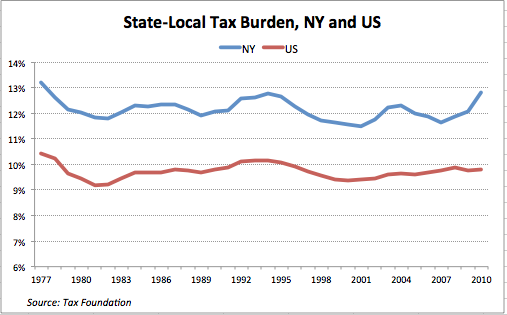 The Tax Foundation uses unique methodology intended to measure all state and local taxes paid by residents of each state, including taxes they may pay in other states (e.g., income taxes owed by New York commuters to New Jersey, or property taxes paid by New Yorkers on vacation homes in Vermont).

While Governor Cuomo may react to this news by again attempting to dismiss the Tax Foundation as “right-wing,” as he did after the Foundation said last week that New York has the nation’s worst Business Tax Climate, New York’s relative burden doesn’t look much lighter when measured and compared more conventionally — e.g., total taxes as a share of total personal income or of state Gross Domestic Product (GDP).  Any way you slice it, the Empire State has imposed very high taxes for a long time.  The modest progress the state made in reducing this burden during the second half of the 1990s has effectively been reversed.

Further interpreting the Tax Foundation numbers: between 2008 and 2010, the national average state-local tax burden remained almost unchanged at 9.9 percent, but New York’s number moved up a full 1.2 percentage points, from a 2008 level of 11.6 percent.  This mainly reflects more than $9 billion in tax hikes, some temporary, enacted by then-Governor David Paterson and the Legislature in 2009 and 2010.

Since taking office, Cuomo temporarily has extended a portion of Paterson’s tax increase on million-dollar earners, while temporarily reducing income taxes in lower brackets, producing a net increase of $1.9 billion over the levels in effect as of 2008.   However, since the 50-state data aren’t completely available for two years, the relatively small effect of this change won’t show up in Tax Foundation data until 2014.

The bottom line: any way you slice or dice the data, New York has a very long way to go to close its tax gap with the rest of the nation.  To match the nationwide average tax burden, as calculated by the Tax Foundation, the combined state and local tax burden on New Yorkers would have to be cut by about $37 billion.  Just to equal the level of neighboring New Jersey, with the second-heaviest tax burden in the 2010 rankings, state and local taxes paid by New Yorkers would have to be about $3 billion lower.