As the old saying goes, the stock market is not the economy—but Wall Street accounts for an extra-big chunk of wealth and income in New York. The pandemic-driven financial crisis is a big reason why Albany’s tax receipts are expected to fall at least $7 billion short of Governor Cuomo’s original budget estimate for FY 2021.

Before the pandemic crash, “net capital gains”—profits from the sale of corporate stock, real estate, and other investments—made up roughly 11 percent of New Yorkers’ adjusted gross income for state income tax purposes, according to Division of the Budget (DOB) estimates based on data through 2017.

The share of total income tax receipts was likely more than 11 percent, because more than 80 percent of the net dollar gains were for New York residents with incomes of $1 million or more, who are in the top tax bracket. These households, in turn, constitute most of the state’s highest-earning 1 percent of residents, who generate more than 40 percent of total state income taxes. And capital gains make up nearly one-third of the income for New York residents earning $1 million or more.

As measured by the Internal Revenue Service, the capital gains share of total federal adjusted gross income was larger in New York than in any state, and more disproportionately concentrated among income millionaires than in any state except California. The securities industry accounted for nearly 7 percent of New York’s economic output—six times the US average. The broader finance, insurance and real estate sector generated 13 percent of New Yorkers’ personal income, more than 2.5 times the national average.

In the current crisis, these numbers spell big trouble for the New York State budget.

The chart below shows the trends in the capital gains share of the state’s PIT base since 1999. Crucially, the figures since 2018 are only DOB estimates—which, for 2020 and 2021, definitely will be much lower than Cuomo’s staff had projected back in January. 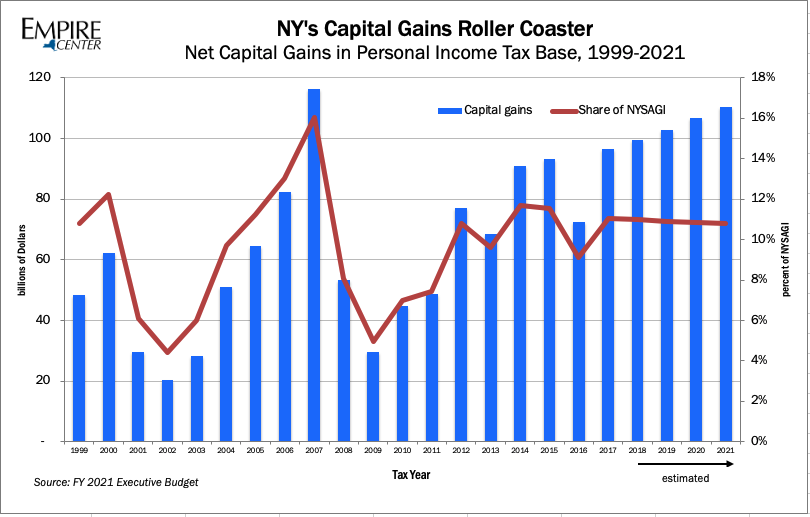 The S&P 500 as of March 23 is down a full 35 percent from its mid-February peak. “Stocks are falling faster than they did during the financial crisis, the crash of 1987 or the Great Depression,” the Wall Street Journal reports. How much of a toll will that take on capital gains in New York’s tax base for 2020 and 2021? The answer for two different scenarios—bad, and worse—are depicted by the chart above.

Following the dot-com crash in the summer of 2000, the S&P 500 fell by 47 percent, and the capital gains income of New Yorkers fell by 67 percent over the next two years, from $62 billion to $20 billion. Over the next five years, the S&P recovered to just above its peak 2000 level, and capital gains income more than quintupled to a new high of $116 billion. But stock prices as measured by the S&P fell again, this time by 56 percent, from October 2007 to March 2009, and capital gains in the New York tax base crashed by 75 percent, to just $29 billion.

So while stock prices and capital gains move in the same direction, net capital gains tend to be even more volatile, reflecting sharper increases and decreases in the value of assets other than corporate stocks, such as real estate, shares in privately held companies, and investment partnership income. This does not augur well for New York’s tax base. Even if stock prices don’t fall any lower in Wall Street’s ongoing liquidity crisis—i.e., Fed policies work and the pandemic-driven economic disruption ends in a month or so—the decrease in capital gains income is likely to be more on the order of 40 to 50 percent.

Note: even before this crisis dawned, capital gains in New York’s tax base still had not recovered to the 2007 level, and were not significantly above the 2006 level.