Maximum pension benefits averaged $69,609 for the 2,582 members of the New York State Teachers Retirement System (NYSTRS) who retired last year with at least 30 years of credited service time, according to data posted today on SeeThroughNY, the Empire Center’s transparency website.

Reflecting regional salary differences, the average pension for the NYSTRS members with 30 years or more of service was highest among retirees from New York City suburban districts. All top five pensions of 2018-19 came from retirees of schools in the Mid-Hudson, while Long Island had the highest average at almost $90,000, as shown in the table below. 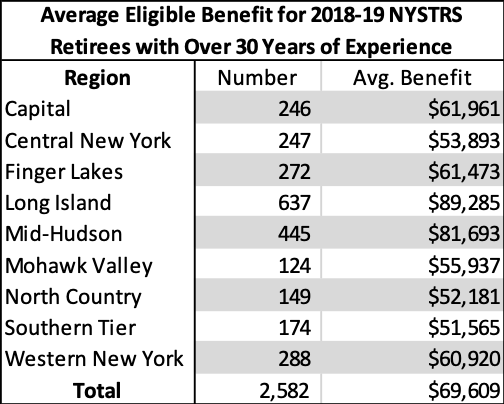 Excluding New York City educators, who belong to a separate city retirement system, the average maximum pension for all 5,537 newly retired NYSTRS members was $48,705. The total includes both part- and full-time public school teachers, many of whom met only a minimum five-year requirement to vest in the pension system.

The number of NYSTRS retirees eligible for annual benefits of $100,000 or more has increased by nearly five-fold since the first school year Empire Center began collecting the data in 2007-08. Last year, 3,802 members were eligible for six-figure benefits, including 224 in the latest group of retirees. Six-figure pensioners included 40 retirees eligible for benefits of $200,000 to $300,000, and four eligible for pensions exceeding $300,000. The top NYSTRS pension earner retiring in 2018-19 was former Washingtonville head of curriculum and instruction Janet Seaman, who can collect up to $199,265.

The full list of NYSTRS retirees and their pension benefit levels was made public thanks to the Empire Center’s successful court challenge to efforts by pension funds to conceal this information from taxpayers. The Center remains involved in litigation to protect and expand the public’s ability to examine public pensions.