As shown by the map below, New York’s private job count as of February was 12.2 percent below the level of a year earlier, according to state and federal estimates. This was twice the national net decline of 6 percent, worse than any state except Hawaii (-19.7 percent), and just ahead of Nevada (-11 percent).

Among the nation’s other big states, only California (-9.7 percent) even approached a double-digit drop in private jobs compared to February 2020. Texas (-5 percent) and Florida (-6.6 percent) had net year-to-year job declines bracketing the much lower national average, even though both those states experienced COVID case surges during the winter.

So much for that “V”

Resident employment data from the monthly Current Population Survey indicated that New York’s statewide unemployment rate rose very slightly in February to 8.9 percent (not a significant change). On a more encouraging note, there also was an estimated increase in the size of the labor force, indicating that slightly more New Yorkers are at least seeking work.

After New York became the nation’s COVID-19 epicenter last March, the year-to-year private job count dropped an incredible 1.9 million jobs in April. Employment began to recover in May and continued rising for five months. Since September, however, there has been virtually no net improvement. The private employment count in February remained stuck at roughly 1 million jobs below the same month in 2020. 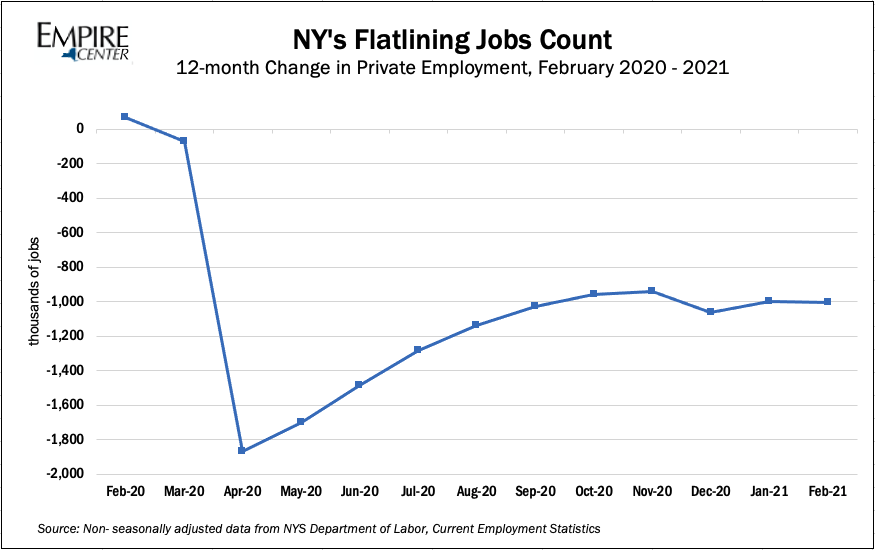 The table below shows how the net job decline has been distributed on a regional basis. Continuing the trend since last spring, the biggest decline has been in New York City, down 15.3 percent, but job losses of 10 percent also were estimated for Long Island and both the lower and mid-Hudson Valley. Upstate metro areas had improved more over previous months but remained above the national average change. 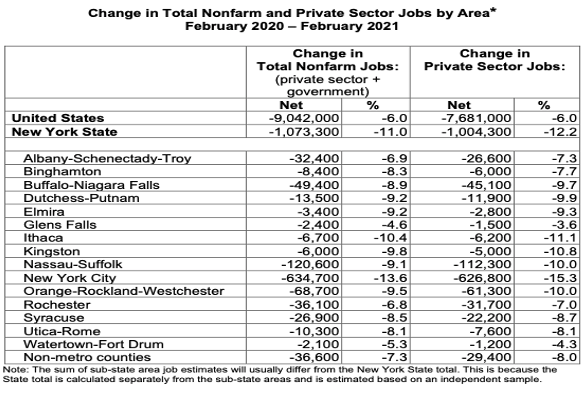 The latest employment data only further underscores the obvious: New York has a lot riding on the pace of business reopening and resumption of normal activities in the coming months.