New York just tallied its biggest year-to-year October private-sector job gain on record, according to the state’s latest monthly state Labor Department report. But even after staying roughly even with last month’s strong nationwide employment trend, the Empire State has far to go before recovering its pandemic losses—and its labor force is still shrinking.

Total private payroll employment in New York last month was estimated at 7,664,500—up a whopping 293,400 jobs, or 4 percent, over the job total in October 2020. In nominal and percentage terms, it was the biggest such increase since the current data series started in 1990. Private employment in the nation as a whole grew at a 4.5 percent pace during the same period.

On a seasonally adjusted basis, New York gained 41,300 jobs—one of the stronger monthly gains in the past year, but was still 8.9 percent (744,000 jobs) below its February 2020 private employment level, while the national total was back to within 2.6 percent of its pre-pandemic peak. The state and national job trends since 2010 are illustrated below.

New York’s leisure and hospitality employers, which shed the most jobs during the pandemic recession, led all sectors with growth of 121,400 additional jobs (up 19.4 percent) on a year-to-year basis, with most of the remaining job growth concentrated in professional and business services, and in educational and health services.

The state’s estimated year-to-year gain of 14,900 manufacturing jobs (up 3.7 percent) may point to stronger end-of-year performance in light of the New York Federal Reserve’s most recent Empire State Manufacturing Survey, conducted the first week in November, which reported a record pace of employment growth and an increase in the average work-week. At the other extreme, job declines were reported for both the construction and financial activities sectors. 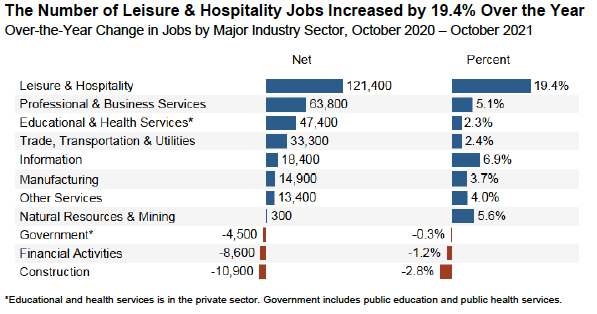 Among major metro areas, job growth was strongest in New York City, up 6.1 percent, and Rochester, up 5.6 percent. 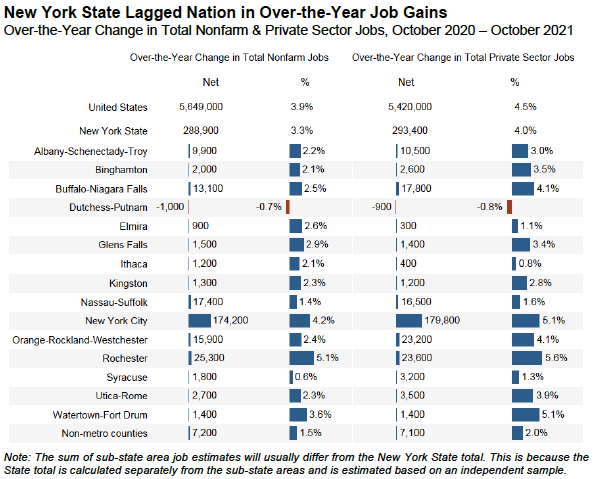 The unemployment tally: a mixed picture

Seasonally adjusted, New York’s statewide unemployment rate decreased very slightly, to 6.9 percent from 7.1 percent, while national unemployment dropped to 4.6 percent from 4.8 percent. But while 11,313 more New York residents reported they were employed, the state’s total labor force shrank by 12,238 people to a total of 9,303,737, which was nearly 200,000 below the pre-pandemic level. By contrast, the labor force nationally held its own, slightly above the previous month, roughly equal to mid-2018 levels.

Based on the preliminary estimate, the unemployment survey indicated there were fewer New Yorkers available for and seeking work in October than in any month since March 2004. If the labor force continues to shrink, it will inevitably tend to hinder growth in payroll employment going forward.