New York’s combined state and local sales tax rate is the seventh highest in the nation, according to a new report from the Tax Foundation.

Because different states can have separate local sales tax rates and tax sharing arrangements, the D.C.-based Tax Foundation uses a formula to establish an average rate for each state.  Although the combined rate in New York ranges from 7 to 8.75 percent depending on the county, the Tax Foundation pegs the statewide average at at 8.48 percent.  Based on the foundation’s rankings, here’s how New York’s sales tax stacks up against those of neighboring states: 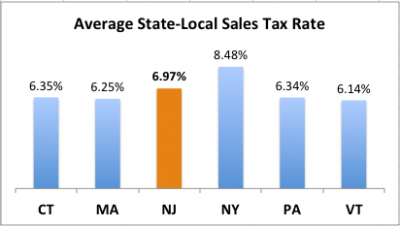 Of course, the sales tax rate alone is not the only indicator of the tax burden. The tax base — how broadly the tax applies to different goods and services, such as groceries and clothing — is also important. According to figures cited in the recent report of the State Budget Crisis Task Force, New York’s sales tax breadth was 26.2 percent of personal income as of 2010, which was narrower than the national norm of 34.5 percent.  New Jersey had an even narrower base, estimated at 25.3 percent of personal income.