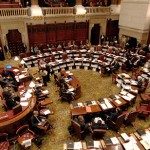 Two late-breaking bills stand out among more than a half-dozen pension sweeteners passed by New York’s state Legislature during the final days of the 2014 session.

One of the measures is potentially significant because it represents the first attempted rollback of any provision of Gov. Andrew Cuomo’s “bold and transformational” Tier 6 pension package of 2012. The other would vastly expand the number of state and local employees who can claim extra service credit for time served in the military.

Under the first bill, uniformed court officers hired since April 1, 2012 will have their “normal” retirement age lowered to 62 from 63, and will be able to retire at age 55 after 30 years of service. Tier 6 had set a minimum retirement age of 63 for all employees and eliminated the 55/30 early retirement option for all members of the state Employee Retirement System (ERS) hired after April 1, 2012. (Court officers were the only ERS members to retain a 55/30 option under former Gov. David Paterson’s Tier 5 plan, which covered employees hired between January 2010 and April 2012.)

The court officers’ pension sweetener has all the earmarks of an election-year special: introduced just two weeks ago by Sen. Martin Golden, R-Brooklyn, it was whisked Thursday from the Golden-chaired Civil Service and Pensions Committee to the Rules Committee to the Senate floor, where it was placed directly on “third reading” and passed by a vote of 59-1. The Senate version was then substituted for an identical Assembly bill and passed in the lower house by a 129-0 margin.

According to an actuarial note attached to the bill, the changes will add 1 percent to the taxpayer-funded employer pension contributions for affected officers.  That’s a small amount to start with—an immediate past service cost of $11,000 plus a recurring annual amount starting at $20,000—but will grow as the salaries of Tier 6 employees grow and as more Tier 6 employees are hired in the future. (There are currently about 3,000 state court officers, who earned an average of $76,870 in 2013, according to data at SeeThroughNY.net. Their total payroll came to $231 million.)

Much more important than the cost is the precedent it represents. If Tier 6 court officers get a 55/30 retirement plan, other unions are virtually certain to press for a restoration of the same highly coveted benefit—notwithstanding the claim by the sponsor’s memo that court employees are entitled to the increase because they are peace officers working a “high-stress environment.”

The original Tier 6 bill itself contained a clause allowing any public employee union, including those representing court officers, to petition the governor for a restoration of early retirement at age 57, but only on the condition that the added cost would be covered by added employee contributions. Under the sweetener just passed by the Legislature, the court officers won’t kick in an extra dime for their 55/30 benefit.

Under current law, employees are eligible to purchase credited pension service time for up to three years of military service, providing they were in the military during the World War II, Korean War and Vietnam eras, or served in specified theaters of combat operations in Grenada, Panama or the Middle East since the 1980s. But the Assembly and Senate yesterday both passed a bill that would remove those restrictions, effectively allowing employees to seek additional pension service credits for any three years in the military, no matter where or when it was served.

The bill first appeared in April as under the sponsorship of Assemblywoman Amy Paulin, D-Scarsdale, and ultimately was superseded by a Senate version filed just last week by Sen. William Larkin, R-Cornwall-on-Hudson. It passed the Senate by a 57-4 margin on Monday and passed in the Assembly yesterday by a vote of 133-1.

If Cuomo signs the bill,  all military veterans hired before 2012 could purchase their added pension benefits at a maximum of cost of 3 percent of their covered salary, while Tier 6 employees would have to pay 6 percent a year. The total cost to the system is much higher: estimated at 12 percent of compensation per year of additional credit for ERS members and 17 percent for members of the Police and Fire Retirement System (PFRS) hired before April 2012. For Tier 6 members, the total cost would come to 9 percent and 14 percent, respectively.

In the absence of more detailed information on the number employees eligible for the benefit, the state actuary did not estimate the total cost in actuarial present-value or recurring annual terms, but some idea of the potential impact could be gleaned from the separate estimate submitted by the New York City actuary, Robert North. The present value cost of added benefits to the five city pension systems would come to $178.5 million, of which $152 million would be borne by the employer (i.e., taxpayers), North said in a note appended to the bill. The added annual employer cost for the city was estimated to start at $18 million.

Five somewhat less sweeping pension sweetener bills passed by both houses of the Legislature are summarized on the Citizens Budget Commission scorecard.